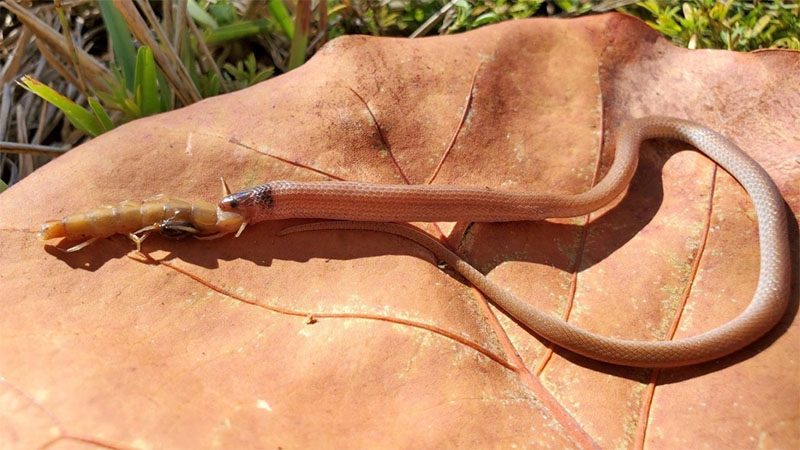 A small and very rare Florida snake bit off more than it could chew recently and was seen dead in a state park with half its meal still visible.

A visitor at John Pennekamp Coral Reef State Park recently came across the snake with a half-swallowed centipede sticking out of its mouth, and shared some pictures of the creature with the Florida Fish and Wildlife Conservation Commission.

The FWRI said centipedes are a pretty common meal for most types of crowned snakes, but this is the first time they’ve seen a rim rock snake attempting the diet.

And in this case, it said, the snake appears to have tried eating a juvenile giant centipede, since it appears to be more than half-swallowed with seven segments of its body still visible.

Adult giant centipedes can actually grow to be the same size as the snake, which usually reach a length of about 25 cm.

Crowned snakes are venomous and immobilize prey, though the FWRI said it’s too small to bite or pose any danger to humans. The centipedes are also venomous, and its bites are painful to humans, the FWRI said.

Rim rock snakes aren’t seen very often, since they typically burrow under debris, rocks or in cavities in limestone, the FWRI said. The last rim rock crowned snake sighting was reported in 2015, and before that, two snakes were found inside a dead coral snake on Key Largo in 2009.

The two creatures are expected to be placed in the Florida Museum of Natural History collection. Florida has designated the rim rock crowned snake as a threatened species.