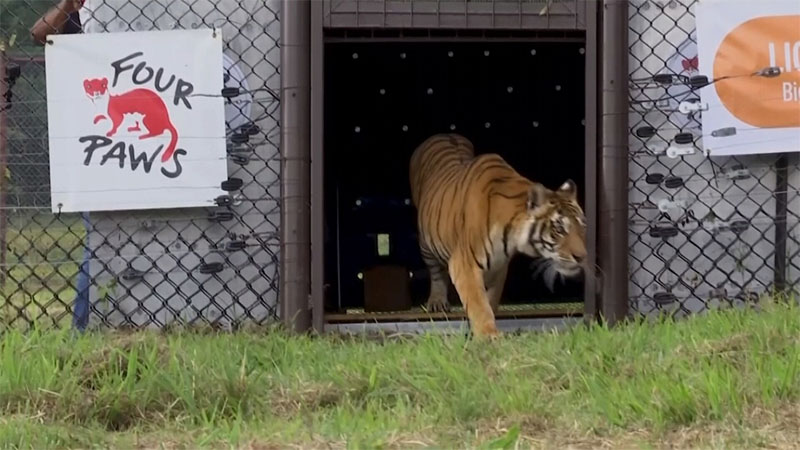 A crane mounted on a flatbed truck carefully moves a large grey crate towards a grassy sanctuary in South Africa known as “Lionsrock”.

Inside the metal box, there is a Bengal tiger that was once forced to perform in a travelling circus, before being locked away in a train carriage.

“I don’t think they will believe they are free,” said Amir Khalil while peering into another crate. “It is difficult. Imagine you are closed for 15 years in a place and one time the door is open.”

Khalil is a veterinarian and project director at an animal welfare organization called Four Paws International.

Along with his team, he helped rescue not one tiger, but four from deplorable conditions in Argentina.

“After all these years living in I would say a metal wagon or train, I can (imagine) how it would be nice to touch the ground again, the grass again,” he said.

Once at the gates of the sanctuary, the door to the crate containing the tiger is slowly opened. While Khalil and several others watch from afar, the big cat cautiously steps into the enclosed field.

As its paws gingerly move through the grass, it quickly looks to the right and then the left, before bolting away from the box that carried it across continents.

Once the tiger is settled, Hildegard Pirker helps the team introduce another one to the sanctuary. Pirker manages the rescue centre, which is located about 18 kilometres outside of South Africa’s Bethlehem.

All animals at the centre come from zoos, circuses and private owners. Many of them have suffered neglect and mistreatment.

“We are happy that they arrived really safe and that they are released,” said Pirker. “Now for us, the work starts, so we are going to, for the next few weeks or however long it takes, we’re going to monitor them now to see if they are settling in.”

In 2007, a circus troupe abandoned a male and female tiger in San Luis, Argentina. A local farmer was asked to take care of them on a temporary basis, however, the animal’s handler never returned to claim them.

With that, the cats were caged in a metal train carriage on the farmer’s property. Since both animals were of breeding age, and neither was sterilized, they eventually had two cubs while in captivity.

“The train carriage was filthy with excrement and leftover meat and bones for a long time, but fortunately this is not the case anymore. Tigers need to move, run, play, and bathe. Being locked in a train carriage and only pacing back and forth for 15 years is not a tiger-worthy life,” said Khalil.

Once an investigation was launched, the organization was brought in to assist in relocating the tiger family.

Since the animals had to travel about 70 hours by plane, a team of experienced veterinarians and wildlife experts was recruited to help with logistics.

Before their departure, Four Paw named each of the tigers. The eldest male was given the name of famous soccer star Lionel Messi.

The World Wildlife Fund, an organization that works in the field of preservation and conservation, estimates there are about 3,900 tigers remaining in the wild. Their decline has been linked to habitat loss, poaching and illegal wildlife trade.

Khalil would like the plight of the former “train tigers” to serve as a reminder that wild animals need to be better protected and do not belong in captivity.

“It’s needed and very important that the next step is to forbid a wild animal to be in private captivity,” he said.

“So it is a clear message, a clear step now. And this is exactly what Lions Rock is doing here in South Africa. We wish not to have animals in any sanctuary and animals to stay free and not to catch them or to breed them in captivity.”

Now that the cats are safe in South Africa, Pirker will take the lead in their care.

“They’re very nervous at the moment that everything is new, and they are aggressive (with) each other and don’t know what to do with all these new things.” said Pirker.

The tigers will be kept in pairs, in two temporary enclosures, with the aim of giving them time to adjust and settle into their new surroundings.

Once staff feel they are ready to mix with other cats living at the sanctuary, they will be moved into a much bigger space than they are in now.

“What we wish is to not have animals in any sanctuary, and for animals to stay free,” said Pirker.

For now, that wish to have the tigers fully free will have to wait. After years of poor treatment, they need to be rehabilitated and that starts with pure pleasure of freely moving and finally sitting in the grass, feeling the Earth beneath them.