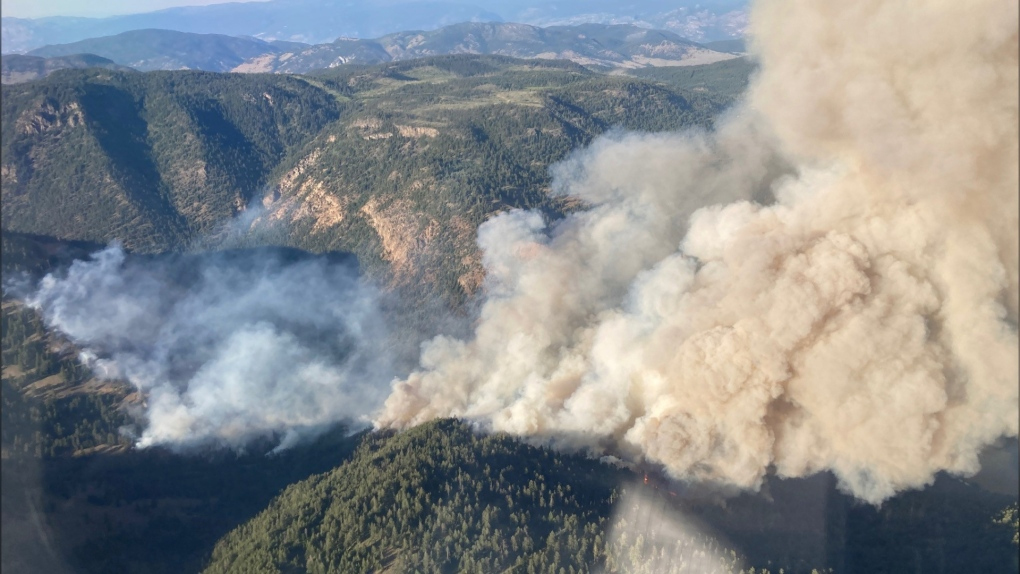 A wildfire in the South Okanagan is rapidly growing, forcing people out of their homes Saturday.

An evacuation order has been issued by the Regional District of Okanagan-Similkameen for 25 properties on Green Mountain Road — which is about 21 kilometres southwest of Penticton — and 357 other properties in the Apex area are on evacuation alert.

We continue to respond to the Keremeos Creek wildfire (K50863) located southwest of Penticton. Today the wildfire displayed aggressive and erratic fire behaviour, and is now estimated to be 440ha. There are now 45 BC Wildfire Service personnel responding on the ground. pic.twitter.com/4CDa381kJb

BC Wildfire Service says the fire is displaying “aggressive and erratic” behaviour and is rapidly growing — from 100 hectares Friday night to 440 hectares on Saturday.

“It can be very disconcerting,” said Erick Thompson, an information officer for the Regional District of Okanagan-Similkameen’s emergency operations centre.

“It’s important to have a plan in place if you do have to leave your property, certainly if you feel threatened and there isn’t an evacuation order or alert in place. You should be prepared to move to a different area. And do that sooner rather than later,” he added.Kamloops fire centre manager Kaitlyn Baskerville says while it might be challenging to leave behind your property and belongings, it’s the safest thing to do right now.

“It’s not necessarily just about your property. It’s also about the community around you and doing what’s right and keeping our crews safe as well,” she said.

The Keremeos Creek fire was discovered Friday, and one structure has already been destroyed.

A smoky skies bulletin has also been issued for the South Okanagan.

“Wildfire smoke is a natural part of our environment but it is important to be mindful that exposure to smoke may affect your health,” reads the bulletin.

Officials urge nearby residents to keep checking for updates as the situation is rapidly changing.

“We’ve been here before. I don’t think there’s reason to be concerned as of yet. We’re continuing to analyze the situation once there is enough justification to recommend an alert or order,” said Baskerville.

While the cause of this fire is still unknown, the majority of new fires in the province within the last 24 hours were sparked by lightning.

We have responded to 40 new fires in the last 24 hours, 13 of which are now classified as Being Held, Under Control or Out. The majority of these fires were sparked by lightning.
We undertake patrols in areas where lightning strikes, based on local conditions.

The service says the fire is in an area that is inoperable for air tanker and heavy machinery support.

Dozens of crews are on scene trying to mitigate the fire, but the steep and rocky conditions make it challenging, says Baskerville.

The Keremeos Creek fire is just one of at least 70 active fires in the province.

While soaring temperatures and dry conditions have increased fire activity, one climatologist says the conditions aren’t as bad as last year and that the short-term outlook seems positive.

“I think come Monday, Tuesday and certainly Wednesday, the heat dome will have broken and will return to some, a little bit of rain, but some seasonable temperatures so a lot of relief for people in the west,” said Environment Canada senior climatologist Dave Phillips.

BC Wildfire is reminding anyone who spots a fire to report it immediately.