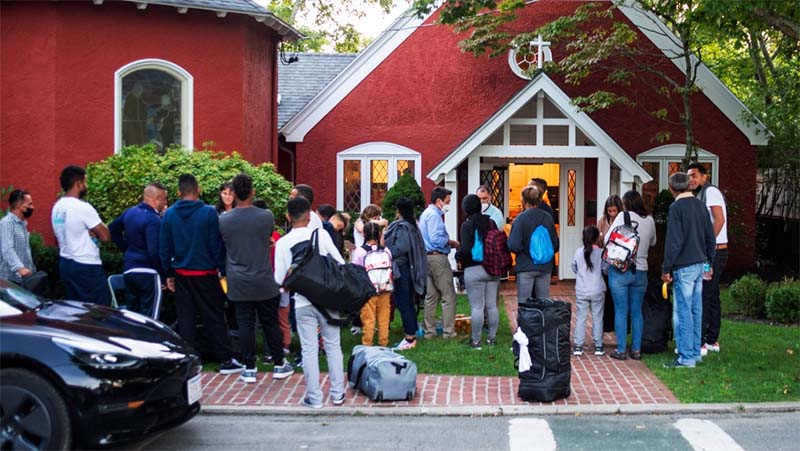 TALLAHASSEE, FLA. – Florida Gov. Ron DeSantis on Wednesday flew two planes of immigrants to Martha’s Vineyard, escalating a tactic by Republican governors to draw attention to what they consider to be the Biden administration’s failed border policies.

Flights to the upscale island enclave in Massachusetts were part of an effort to “transport illegal immigrants to sanctuary destinations,” said Taryn Fenske, DeSantis’ communications director.

While DeSantis’ office didn’t elaborate on their legal status, many migrants who cross the border illegally from Mexico are temporarily shielded from deportation after being freed by U.S. authorities to pursue asylum in immigration court — as allowed under U.S law and international treaty — or released on humanitarian parole.

Massachusetts’ Gov. Charlie Baker, a Republican, said he was in touch with local officials and that short-term shelter was being provided.

Martha’s Vineyard has styled itself as a “sanctuary destination” that welcomes migrants — a position it took early in former U.S. President Donald Trump’s administration.

State Rep. Dylan Fernandes, who represents Martha’s Vineyard, tweeted: “Our island jumped into action putting together 50 beds, giving everyone a good meal, providing a play area for the children, making sure people have the healthcare and support they need. We are a community that comes together to support immigrants.”

DeSantis, who is mentioned as potential presidential candidate, appears to be taking the strategy to a new level by using planes and choosing Martha’s Vineyard, whose harbour towns that are home to about 15,000 people are far less prepared than New York or Washington for large influxes of migrants.

The move is likely to delight DeSantis’ supporters who deride Democrat-led, immigrant-friendly “sanctuary” cities and anger critics who say he is weaponizing migrants as pawns for political gain.

The Florida Legislature appropriated US$12 million to transport “illegal immigrants” from the state consistent with federal law, Fenske said.

“States like Massachusetts, New York, and California will better facilitate the care of these individuals who they have invited into our country by incentivizing illegal immigration through their designation as ‘sanctuary states’ and support for the Biden Administration’s open border policies,” Fenske said.

Our island jumped into action putting together 50 beds, giving everyone a good meal, providing a play area for the children, making sure people have the healthcare and support they need. We are a community that comes together to support immigrants. pic.twitter.com/kG5bglhbLe

Next steps for Iowa teen sentenced for killing rapist