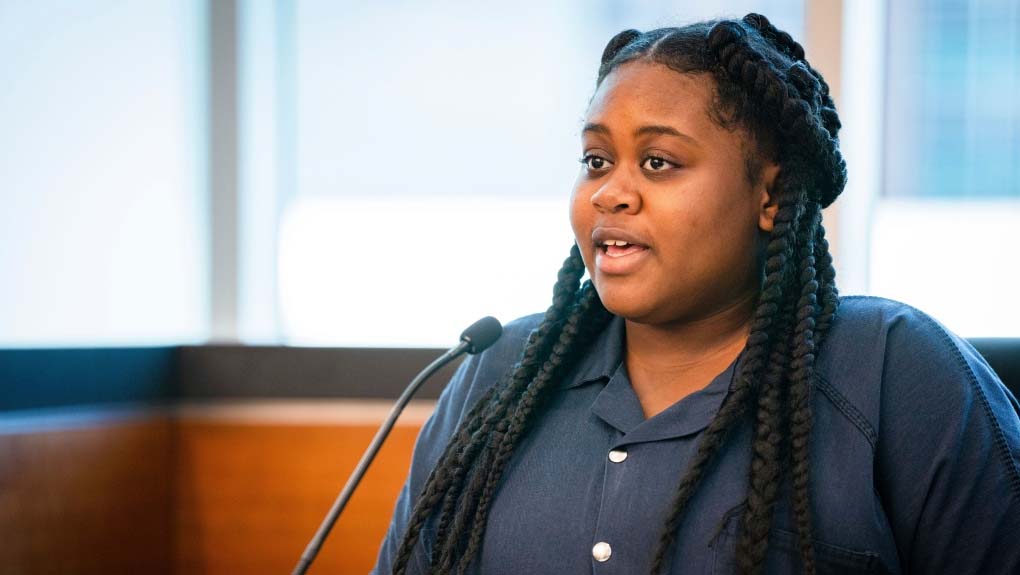 DES MOINES, IOWA – Donations are pouring in to help a 17-year-old sex trafficking victim who was ordered by a court to pay $150,000 to the family of a man she stabbed to death after he raped her.

A GoFundMe campaign set up for Pieper Lewis has already raised more than $200,000 just one day after the restitution order was handed down by an Iowa judge.

Lewis also received a deferred 20-year prison sentence on Tuesday that will be expunged if she successfully completes five years of closely supervised probation. Prosecutors described the sentence as merciful for a teen who had been horribly abused – and the judge said the law compelled him to order the $150,000 payment – but it struck many observers as unnecessarily harsh.

Lewis pleaded guilty last year to involuntary manslaughter and wilful injury in the June 2020 killing of 37-year-old Zachary Brooks, a married father of two. Lewis was 15 when she stabbed Brooks more than 30 times in a Des Moines apartment.

Lewis has maintained that she was trafficked against her will to Brooks for sex multiple times and stabbed him in a fit of rage. Police and prosecutors have not disputed that Lewis was sexually assaulted and trafficked.

The Associated Press does not typically name victims of sexual assault, but Lewis agreed to have her name used previously in stories about her case.

Here’s a look at how Lewis ended up facing criminal charges in an Iowa court and what’s next for her:

WHAT’S THE BACKSTORY OF THE GOFUNDME CAMPAIGN FOR LEWIS?

The account was set up late last year for Lewis by one of her former high school teachers. Initially the goal was set at $150,000 to cover the restitution payment. All additional money raised will help Lewis pay for college or start her own business, and help other young victims of sex crimes.

“Pieper has five years of probation ahead of her; five years that she will be required to be nearly perfect to avoid facing 20 years in prison,” Leland Schipper, a math teacher at Des Moines Lincoln High School, said on the GoFundMe page. “Pieper’s path to true freedom will not be easy, and she is still a teenager that has experienced a lot of trauma.”

The vast majority of donations came in increments of less than $50. Almost every donor offered words of encouragement or outrage over the teen’s prosecution – and sometimes both.

“Pieper, from one survivor to another, life gets better,” one $20 donor wrote. “I am disgusted you spent a second in jail, but don’t look back. Use whatever funds are left to move on and move up.”

Iowa law mandates that anyone convicted of a felony that leads to the death of another person must pay “at least” this much to the victim’s estate.

The payment cannot be discharged through bankruptcy, and it does not preclude a victim’s family from suing for more damages. But there is nothing in the law that would appear to bar someone from using donations to pay the restitution, said Grant Gangestad, a criminal defence attorney who helps lead the Iowa Association for Justice, a trade group for trial lawyers.

Lewis’ lawyers argued that as a victim of human trafficking and sexual abuse, she should be spared from making any payment at all. They argued that Brooks was partially responsible for what happened and that such restitution would be cruel and unusual under the circumstances.

The judge rejected those arguments at Tuesday’s sentencing hearing, noting that the Iowa Supreme Court has upheld the state’s restitution law even in the face of some of those same arguments.

It is not clear whether Lewis’ lawyers will appeal; they said Wednesday they are still weighing their options.

WHY DID PROSECUTORS CHARGE LEWIS FOR KILLING A MAN WHO RAPED HER?

Dozens of states have so-called safe harbour laws that give trafficking victims at least some level of criminal immunity. Iowa is not one of them.

Iowans can avoid being convicted of violent crimes, however, if they can prove that they faced `’imminent” serious injury.

While nobody disputed that Lewis was sexually assaulted and trafficked, prosecutors successfully argued that Brooks was not an immediate danger to Lewis because he was asleep at the time he was stabbed.

Prosecutors said that their goal in seeking charges against Lewis was twofold: To ensure the protection of the public from someone capable of stabbing another person to death, and to ensure that Lewis receives the rehabilitative help she needs.

HAS THE MAN LEWIS ACCUSED OF TRAFFICKING HER BEEN CHARGED?

No. Lewis has said she lived with a man for more than two months in 2020 after she had run away from an abusive home. The then-28-year-old man told her she was his girlfriend, but told others she was his niece, Lewis said.

The man told her she couldn’t live with him for free, she said, and created a dating profile for her on websites and arranged for her to have sex with other men for money, which occurred seven or eight times when she lived with him.

It was this man who took her to Brooks beginning in May 2020 to have sex, she said. When she resisted going back to Brooks’ apartment another time, Lewis said the man held a knife to her neck and cut her with it.

Lewis names the man in court documents, but The Associated Press is not releasing his name because he has not been charged with a crime.

“No charges have been filed,” Sarcone said. “The matter is under investigation, and our office will not comment further.”

WHAT’S NEXT FOR LEWIS?

Lewis’ five years of supervised probation will be spent at the state’s Fresh Start Women’s Center in Des Moines, a low-level prison facility that allows convicts some level of freedom to work and make some trips outside the facility. Lewis’ whereabouts will be monitored through a GPS-enabled ankle bracelet.

She was also ordered to conduct 600 hours of community service, to be carried out by speaking to other young people about the dangers they face and the importance of making responsible choices.

“You have a story to tell,” Polk County District judge David M. Porter said at her sentencing. “You should be willing to tell it to other young women.”

Lewis, who earned her GED diploma while being held in juvenile detention, has said she would like to go to college and dreams of being a fashion designer.

At Tuesday’s sentencing hearing, she expressed both hope and fear for her future.

“I know that I am being watched by a million eyes. The reality is, I will make mistakes, even with the court’s pressure,” she said, reading from a prepared statement.

Pelosi to visit Armenia as ceasefire with Azerbaijan holds