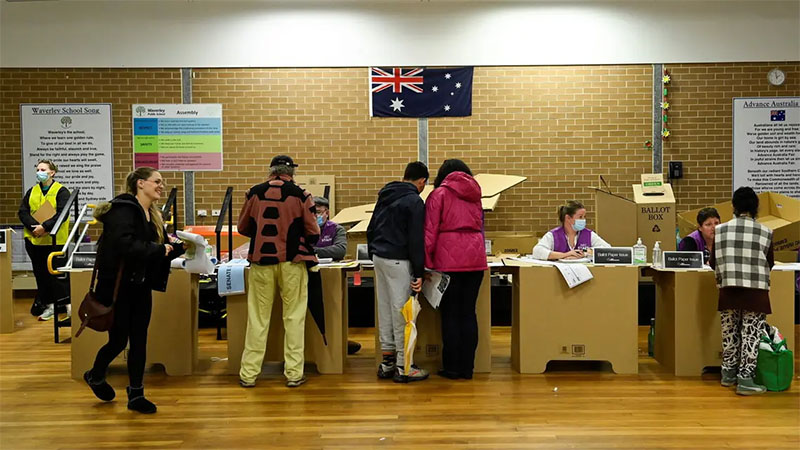 Voting in Australia’s eastern states closed on Saturday with opinion polls showing the opposition Labor Party narrowly ahead of Prime Minister Scott Morrison’s conservative coalition, which has ruled for almost a decade.

However, a strong showing by climate-focused independents could result in a hung parliament.

Most of Australia’s people live on its east coast, where polling booths at suburban churches, beachside pavilions and outback halls closed at 6:00 p.m. (0800 GMT).

The states of New South Wales, Victoria, Queensland and Tasmania, and the Australian Capital Territory, account for 124 of the 151 lower house parliamentary seats up for grabs.

Voting was ongoing in South Australia state and the Northern Territory until 0830 GMT and in Western Australia state until 1000 GMT, by which time details of some early vote counts from the eastern states are expected to be known.

Centre-left Labor had held a decent lead after nine years in opposition, but recent polls showed Morrison’s Liberal-National government narrowing the gap in the final stretch of a six-week campaign.

A Newspoll survey by The Australian newspaper out on election day showed Labor’s lead over the ruling coalition dipping a point to 53-47 on a two-party-preferred basis, where votes for unsuccessful candidates are redistributed to the top two contenders.

Morrison and opposition leader Anthony Albanese cast their votes in Sydney after making whistle-stop tours across marginal seats in the final two days of a campaign dominated by rising living costs, climate change and integrity.

“Today, Australians are making a big choice about their future,” Morrison told reporters outside a voting center. “Australia needs someone who knows how to manage money, knows how to deal with national security interests, knows how to move forward and secure that strong economy.”

Albanese said Australians want a change of government, which he said had nothing to be proud of.

“I’ve put us in a position where at worst we’re competitive today. We’re in the hunt here,” Albanese said about his chances at the polls.

“In the fourth quarter, I want to kick with the wind at my back, and I believe we have the wind at our back,” he said in a reference to Australian Rules football, one of the country’s most popular sports.

As Labor focused on spiking inflation and sluggish wage growth, Morrison made the country’s lowest unemployment in almost half a century the centerpiece of his campaign’s final hours.

While the economy is a key issue, several “teal independents” are challenging a number of affluent Liberal-held seats, campaigning for action on climate change after some of the worst floods and fires to hit Australia.

Three volunteers working for teal independent Monique Ryan, who is running against Treasurer Josh Frydenberg in the long-held Liberal seat of Kooyong in Melbourne, said they joined Ryan’s campaign because they are concerned about the climate for the sake of their children or grandchildren.

“For me, it’s like this election actually feels hopeful,” Charlotte Forwood, a working mother of three adult children, told Reuters.

In the outgoing parliament, the Liberal-National coalition held 76 of the 151 lower house seats, while Labor held 68, with seven minor party and independent members.

Voting is compulsory and initial results should be known by Saturday evening, although the Australian Electoral Commission has flagged a clear winner may not immediately emerge if it is a close contest, due to the time required to count about 3 million postal votes.

More than half of votes had already been cast by Friday evening, with a record eight million early in-person and postal votes, the commission said.