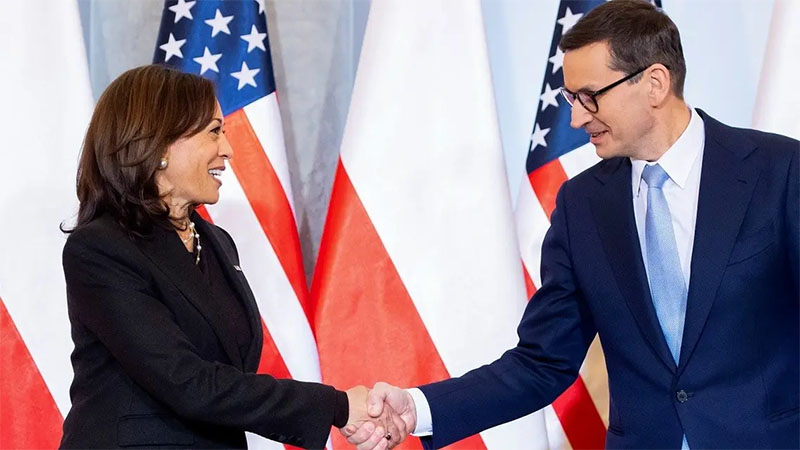 Vice President Kamala Harris on Thursday praised the Polish people for their generosity for taking in more than 1 million refugees since Russia invaded Ukraine last month.

Harris made the comments as she met with Polish Prime Minister Mateusz Morawiecki hours after the US House passed a massive spending bill that includes $13.6 billion in aid for Ukraine and its European allies.

The legislation includes $6.8 billion to care for refugees and other economic aid to allies.

“I’ve been watching or reading about the work of ordinary people doing extraordinary things, and so I bring you thanks from the American people,” Harris said.

Harris also met with Polish President Andrzej Duda, and the two were scheduled to hold an afternoon news conference. Later on Thursday, the vice president was slated to meet with Ukrainian refugees who have fled to Poland since the Russian invasion began.

The vice president is also scheduled to meet with Canadian Prime Minister Justin Trudeau while in Warsaw. The Canadian leader has been in Europe in recent days meeting with allies about Ukraine.

Harris’ whirlwind visit to Poland and Romania was billed by the White House as a chance for the vice president to consult with two of the leaders from eastern flank NATO nations about the growing humanitarian crisis caused by the Russian invasion of Ukraine.

Already, more than 2 million refugees have fled Ukraine — with more than half coming to Poland — and even more expected to arrive in the days ahead.

But differences between Warsaw and Washington over a Polish plan to send Soviet-made fighter jets to a base in Germany for Ukraine’s use have cast a shadow over Harris’ visit to Poland. Just as Harris arrived in Warsaw late Wednesday evening, the Pentagon definitively rejected the idea.

The proposal was publicly floated by Poland — without first consulting the US — days after Secretary of State Antony Blinken said the Biden administration was “very, very actively” looking at a proposal under which Ukraine’s neighbor Poland would supply Kyiv with Soviet-era fighters and in turn receive American F-16s to make up for their loss.

Polish government officials, however, insisted any transfer of planes must be done within the NATO framework.

On Wednesday, the Pentagon shut the door on the prospect of NATO transferring jets to Ukraine, saying such a move with a US and NATO connection would run a “high risk” of escalating the Russia-Ukraine war.

Gen. Tod D. Wolters, the commander of US European Command, said in a statement Thursday that the “most effective way to support the Ukrainian military in their fight against Russia is to provide increased amounts of anti-tank weapons and air defense systems.” That effort by the US and allies is ongoing, Wolters added.

Harris will travel on Friday to Bucharest, where she’s to meet Romanian President Klaus Iohannis.