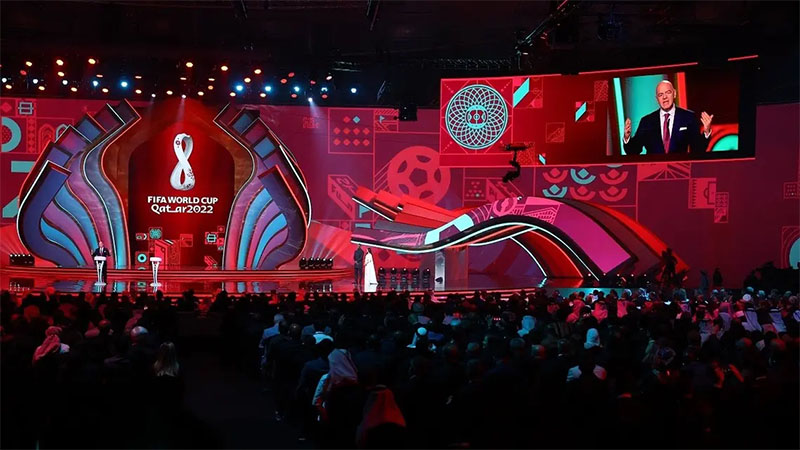 Global soccer heavyweights were pitted head-to-head and intriguing political storylines drawn as the schedule for the 2022 World Cup was completed at a glitzy ceremony in the Qatari capital on Friday.

Four times champions Germany were drawn in Group E with 2010 winners Spain, while the United States were pitted against Iran, a country with whom they have had long-running political disputes, along with England, and potentially Ukraine, in Group B.

Holders France will meet Denmark and Tunisia in Group D while the tournament will kick off on Nov. 21 with hosts Qatar playing Ecuador.

The toughest group looks to be Group G which put five-times World Cup winners Brazil against Serbia, Switzerland and Cameroon in highly competitive match-ups which had purists rubbing their hands in anticipation.

Brazil coach Tite certainly knows the size of the task ahead. “If you see recent results from our opponents… We will have to work to be able to cope well,” he said.

“I watched the Swiss (qualifying) game against Italy, a world-class, high-level game. We will need to be at our highest level.”

For others, the group pairing the US with Iran and former colonial masters England was a fascinating one.

“The history of England and the United States it runs deep right?” US coach Gregg Berhalter said. “We can’t get away from that, that is something that is in us as a nation.

“Having said that there is the other side is that the PL (Premier League) is the biggest league in the world and the players are the most visible in the world and it is always a great game when we play England.”

He did not want to be drawn on the political nuance of the Iran contest, saying: “I think it is about soccer at the end of the day and the best sign of friendship that you can make is competing hard on the field in a fair way and that is what the World Cup is all about and what makes it special.

“We have a ton of respect for Iran and how they qualified and we are looking forward to competing against them.”

The US versus England clash will see Berhalter pit his wits against Gareth Southgate, a coach he greatly admires.

“We go way back,” Berhalter said. “He’s a guy I look up to. He’s always been there for me and given me advice. When I first took the job I looked to him as a mentor.”

The fourth team in Group B will be the winner of the European playoff – Wales, Scotland or Ukraine – which is set to be played in June.

The tournament will run from Nov. 21 to Dec 18. It will be the first time the tournament has been hosted in the Middle East.