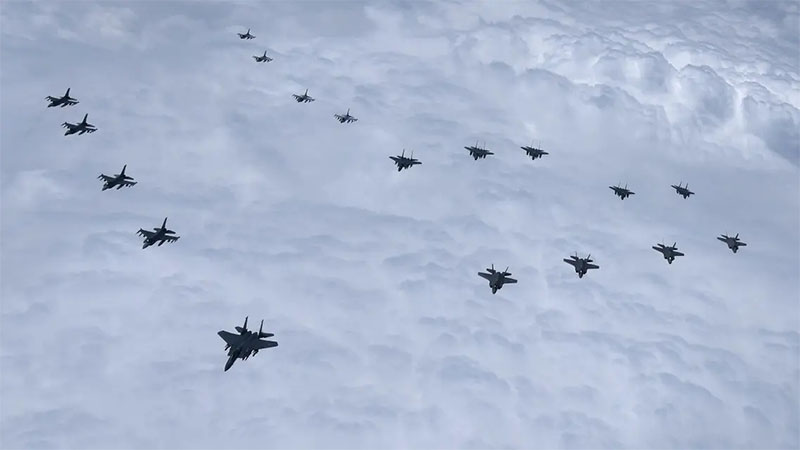 South Korea and the United States flew warplanes including stealth fighter jets over waters around the Korean peninsula Tuesday in a fresh show of force following recent missile tests by the North, Seoul said.

Sixteen South Korean warplanes, including F-35 stealth fighters and four US F-16 jets, formed an attack squadron over the West Sea – also known as the Yellow Sea – to “respond to the enemy threat,” Seoul’s Joint Chiefs of Staff said in a statement.

The allies “demonstrated their strong ability and will to strike quickly and accurately against any provocation from North Korea,” it added.

The air maneuvers, which involved some 20 warplanes, come a day after the allies fired eight ballistic missiles into the Sea of Japan in the wake of Pyongyang’s Sunday weapons tests.

On Sunday, North Korea fired eight short range ballistic missiles from four different locations in the space of 30 minutes – one of its largest-ever tests, analysts said.

The nuclear-armed country has carried out a blitz of sanctions-busting weapons tests this year, including firing an intercontinental ballistic missile at full range for the first time since 2017.

US and South Korean officials have been warning for weeks that Kim Jong Un’s regime is preparing to carry out a fresh nuclear test.

US Deputy Secretary of State Wendy Sherman, in Seoul on a three-day visit, warned there would be a “swift and forceful” response were Pyongyang to go ahead with what would be its seventh such test.

“Any nuclear test would be in complete violation of UN Security Council resolutions,” she told reporters after meeting with her South Korean counterpart.

The entire world will respond in a “strong and clear manner,” she said, adding: “We are prepared.”

Sherman said the United States was still willing to engage in dialogue with the North, saying that Washington “harbors no hostile intent toward” Pyongyang.

Tuesday’s air maneuvers are the third such joint show of force by the allies under South Korea’s hawkish new President Yoon Suk-yeol, who has vowed a tougher stance against Pyongyang.

Japan to open to tourists after two years but only with masks, guides

Afghan leader unlikely to have fled Kabul with millions in cash: US watchdog