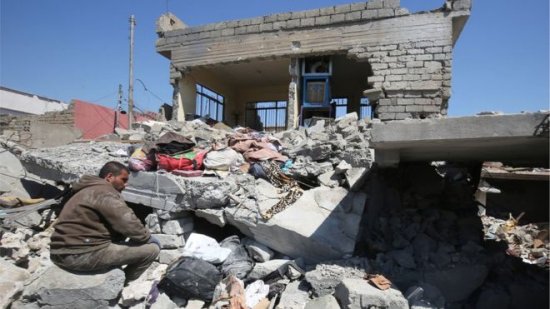 The United States has admitted that at least 105 Iraqi civilians were killed in an air strike it carried out in Mosul in March.

US Central Command (CentCom) said it had targeted two snipers from so-called Islamic State (IS) with what it called a “precision-guided munition”.

However, the strike detonated explosives that militants had placed in the building, CentCom said.

Civilians sheltering in the lower floors were killed when it collapsed.

CentCom said the death toll included four civilians in another nearby structure.

Eyewitnesses claimed another 36 non-combatants were also in the building, but US authorities said it had “insufficient evidence to determine their status”.

CentCom previously said the planes had acted at the request of Iraqi security forces, as coalition forces attempted to wrest control of the city from IS.

The civilians had gathered in the lower floors of the building after being expelled from their homes by IS fighters, a declassified summary of the report said.

Those organising the strike “could not have predicted the presence of civilians in the structure prior to the engagement,” it added.

US officials said the type of bomb was chosen “to minimise collateral damage,” but the explosives hidden by IS were at least four times more powerful than the weapon itself.

“Our condolences go out to all those that were affected,” Major General Joe Martin said in a statement.

“The coalition takes every feasible measure to protect civilians from harm.”

Initial media reports had placed the casualty estimates as high as 200.

Hundreds of thousands of civilians have fled the northern Iraqi city as the operation to reclaim it has continued.

Thousands of Iraqi security forces, Kurdish Peshmerga fighters, Sunni Arab tribesmen and Shia militiamen, assisted by US-led coalition warplanes and military advisers, are involved in the offensive, which was launched in October 2016.

The government announced the full “liberation” of eastern Mosul in January 2017. But the west of the city has presented a more difficult challenge, with its narrow, winding streets.

Iraq has also opened an inquiry into claims that its forces abused and killed civilians in the battle for the city.

Trump warns of Iranian nuclear threat on visit to Israel