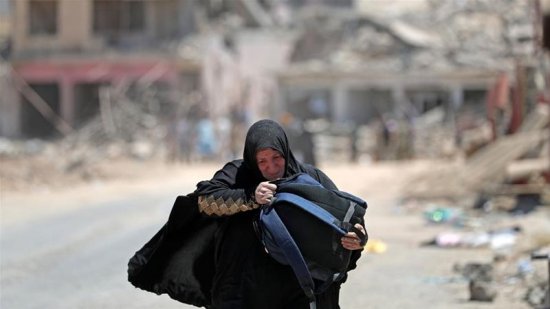 Fighters from the ISIL (Islamic State of Iraq and the Levant, also known as ISIS) group have killed more than 160 people in one day last week to prevent them from fleeing western Mosul, according to the United Nations.

The agency on Tuesday accused ISIL of carrying out the attack in the group’s last stronghold, where a coalition of troops is working to flush out the fighters.

“Yesterday, my staff reported to me that bodies of murdered Iraqi men, women and children still lay on the streets of the al-Shira neighbourhood of western Mosul, after at least 163 people were shot and killed by Daesh to prevent them from fleeing.”

Hussein made the comments in his opening address to the UN Human Rights Council.

His spokesman, Rupert Colville, told the AFP news agency that the killings were believed to have taken place on June 1.

In late May, Iraqi forces launched a broad assault on parts of Mosul, closing in on the remaining pockets of territory held by ISIL.

Aid groups had expressed their concerns over the safety of hundreds of thousands of civilians at risk of being caught in the crossfire.

On Monday, UNICEF warned that 100,000 children were still in ISIL-held areas, living under extremely dangerous conditions.

Peter Hawkins, UNICEF’s representative in Iraq, said the agency is receiving “alarming reports” of civilians being killed, including children, with some caught in the crossfire while trying to flee.

Separately, Human Rights Watch (HRW) said on Monday that at least 26 bodies of “blindfolded and handcuffed” men were found in government-controlled areas and around the city since the operation started.

Local armed forces told foreign journalists that 15 men were extrajudicially killed by government forces who were holding them on suspicion of being affiliated with ISIL, the rights group said.

HRW said that in the remaining cases reported by local and international sources, the sites of the apparent executions – all in government-held territory – raise concerns about government responsibility for the killings.

Last month, Stephen O’Brien, the UN under-secretary for humanitarian affairs, said the organisation had “deep concern” for hundreds of thousands of civilians trapped behind ISIL lines.

“Although the UN is not present in the areas where fighting is occurring, we have received very disturbing reports of families being shut inside booby-trapped homes and of children being deliberately targeted by snipers,” O’Brien said.

ISIL overran large areas north and west of Baghdad in 2014, but Iraqi forces backed by US-led air raids have since regained much of the territory they lost to the group.

Iraqi forces launched a major operation to retake Mosul in October last year, fighting their way to the city and retaking its eastern side before setting their sights on its smaller but more densely populated west.

The eastern half of Mosul was declared liberated in January and the push for the city’s western section, separated from the east by the Tigris River, began the following month.

Almost 10,000 people fled from Mosul’s northwest and the Old City every day last week, according to UN estimates.

More than 750,000 people have been displaced from the city since October.