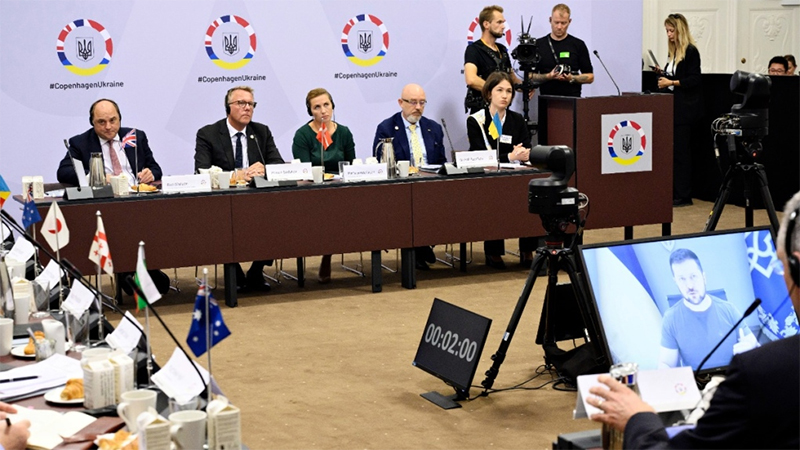 “The sooner we stop Russia, the sooner we can feel safe,” Zelenskyy said while addressing defence leaders at a Denmark conference aimed at strengthening financing for weapons, training and demining work in his country.

“We need armaments, munitions for our defence,” he added, speaking via a live link from Ukraine.

The conference in Copenhagen is a follow-up to an April meeting at a U.S. air base in Germany that established the U.S.-led Ukraine Defence Contact Group, which coordinates international military support for Ukraine.

“In the first stage, we need fighters. After that, demining,” Reznikov said.

Denmark is co-hosting the daylong conference in Copenhagen with Britain and Ukraine. British Defence Secretary Ben Wallace said the goal of the event was securing “concrete steps.”

He announced that Britain says it will send more multiple launch rocket systems and guided missiles to Ukraine to help it resist Russia’s invasion.

The new weapons, whose number wasn’t specified, come on top of several rocket-launch systems given by Britain to Ukraine earlier this year. Ukrainian troops have been trained in Britain to use them.

“Our continued support sends a very clear message, Britain and the international community remain opposed to this illegal war and will stand shoulder-to-shoulder, providing defensive military aid to Ukraine to help them defend against Putin’s invasion,” Wallace said.

Before the conference started, the Danish government said it would give Ukraine an extra 820 million kroner (US$113 million), which would bring Denmark’s total contribution to the war effort to more than 3 billion kroner ($413 million). Danish Prime Minister Mette Frederiksen called it “a huge donation.”

Part of the money would pay for 130 Danish troops to help train Ukrainian forces in Britain over the coming months.

“We will not let you down,” Frederiksen said as she opened the conference.

“There still is a very strong support to help Ukraine, also on the long run. It is decisive for Ukraine to be able to defend itself against the Russian attack,” Arild Gram said.

The Kyiv School of Economics released a report Wednesday assessing the cost of war damage to Ukraine’s infrastructure at more than $110 billion. The report said 304 bridges and more than 900 health care facilities were either destroyed or damaged.