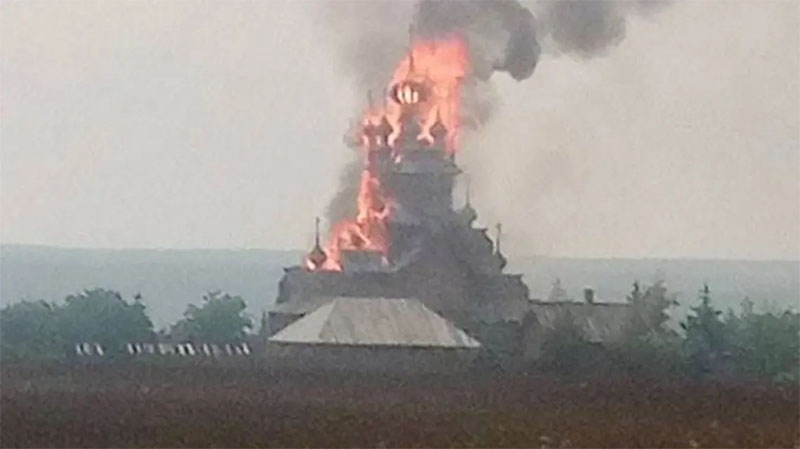 A wooden Orthodox church on one of Ukraine’s most sacred Orthodox sites was set ablaze Saturday, church authorities said, amid fierce fighting in the Donbas between Russian and Ukrainian forces.

“As a result of hostilities, a large-scale fire broke out on the territory of the All Saints Skete of the Holy Dormition Sviatogirsk Lavra,” their statement said.

“The flames completely engulfed the main church of the monastery,” it added.

Recent battles between Russia and Ukraine have centered on the eastern Lugansk and Donetsk regions after Moscow failed to capture the capital Kyiv early in the invasion.

Ukrainian Culture Minister Oleksandr Tkachenko blamed Russian forces for the blaze in a post on social media. He said about 300 displaced Ukrainians had been seeking shelter there, including 60 children.

Skete of All Saints of the Holy Dormition Svyatogorsk Lavra is now on fire caused by russia’s hostilities.
There were about 300 refugees, about 60 children.
racists continue to prove inability to be part of civilized world.
133 🇺🇦 religious buildings already suffered from russia pic.twitter.com/NHKNHpN8S8

Russia continues “to prove its inability to be part of the civilized world,” he said in the statement condemning the attack.

Plumes of black smoke and flames rose from onion domes of a church structure in an unattributed picture he posted accompanying the statement.

Russia’s defense ministry said in a statement carried by the state-run TASS news agency that its military was not conducting military operations in the region.

The site hosts one of the largest wooden churches in Ukraine and it was reportedly caught in the fighting several times already in the last month.

The facility is seen as one of the three most sacred sites in Ukraine for Orthodox believers. Before the war, it drew thousands of pilgrims a year.