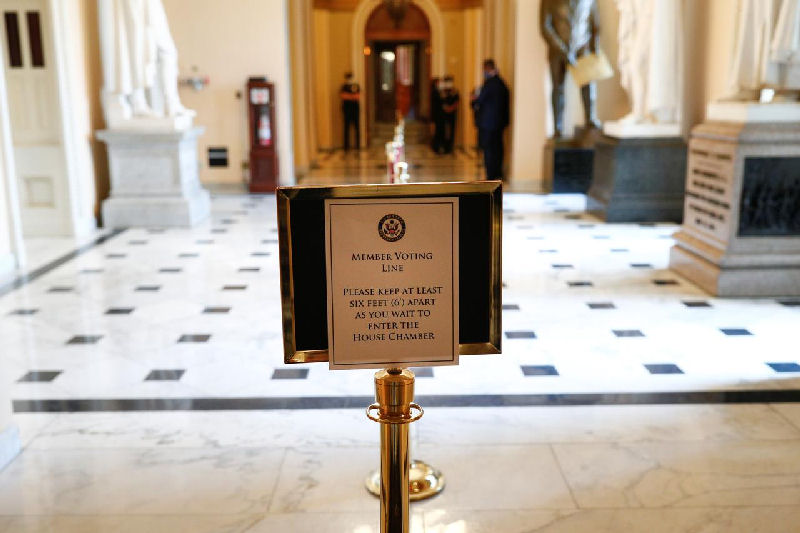 Lawmakers in the U.S. House of Representatives will not return to Washington next week as planned, due to the continuing risk of coronavirus infection, a top House Democrat said on Tuesday, in a reversal of plans outlined only a day earlier.

House Majority Leader Steny Hoyer said he and House Speaker Nancy Pelosi made the decision to keep the chamber on an extended recess after Hoyer discussed the situation with the official House physician. “The House physician’s view was that there was a risk to members that was one he would not recommend taking,” Hoyer told reporters.

On Monday, Hoyer’s office said on Twitter that lawmakers would return on May 4. But some House Democrats expressed unhappiness with the decision during a conference call.

Congress has not met in regular session since last month, though it has passed major coronavirus relief bills worth nearly $3 trillion, partly by using rules allowing bills to pass with just a small number of lawmakers present.

Hoyer said the House still intends to return soon to complete a new coronavirus response bill that Democrats have vowed to use as a vehicle for funneling hundreds of billions of dollars in federal assistance to state and local governments.

Hoyer said an amount requested by governors, $500 billion, was under discussion, but that no decision had been made. Lawmakers have already provided $150 billion to state and local governments in previous legislation.

Earlier on Tuesday, Senate Democratic leader Chuck Schumer warned that state and local governments will see “massive” layoffs without more aid from Congress to keep police, firefighters, ambulance crews and other frontline workers on the job.

“There’s going to be massive layoffs at the state and local level unless we get money to them quickly,” Schumer said in an interview with MSNBC’s “Morning Joe” program.

Senate Majority Leader Mitch McConnell, the top Republican who stirred a political hornet’s nest last week by suggesting states could file for bankruptcy, told Fox News Radio on Monday that Congress could approve further funding for states. But he said he would also demand liability protection for businesses and healthcare providers.

With the Senate due to return to session on Monday, Hoyer pushed back on the suggestion that the House was not working while the Senate and White House are.

“As I understand it, the Senate is coming back so they can confirm judges, and confirm executive appointments. Now whether they are going to do any substantive legislation is another question,” he said. As for the White House, Hoyer said it was arguable whether its nightly news conferences on the coronavirus amounted to work.

In the interim before the House returns to Washington, Hoyer said he was seeking agreement with House Republicans on allowing committees to do “virtual” work, using technology to meet and draft legislation.