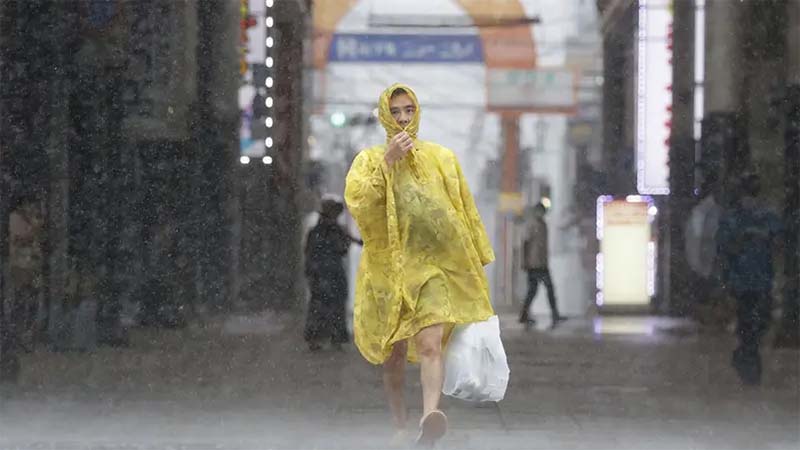 Typhoon Nanmadol brought ferocious winds and record rainfall to western Japan on Monday as one of the biggest storms to hit the country in years killed at least one person, disrupted transport and forced some manufacturers to suspend operations.

Prime Minister Fumio Kishida delayed his departure to New York, where he is due to deliver a speech at the UN General Assembly, until Tuesday to monitor the impact of the storm, local media reported.

Japan’s 14th typhoon of the season made landfall near Kagoshima city late on Sunday before battering the western island of Kyushu and then roaring onto the main island of Honshu on Monday morning.

A river in Kyushu’s Miyazaki prefecture overflowed, flooding fields and roads, footage from state broadcaster NHK showed. Other video showed a riverside house half hanging over a torrent, the tin roof ripped off a gas station, and a toppled billboard leaning over a street from the top of a building.

NHK said one man was found dead inside his car, which was found submerged to the rooftop in the middle of a field.

Another man was found unconscious in an area hit by landslides.

At least 82 people have been injured, NHK said.

About 340,000 households, most of them in Kyushu, were without electricity early on Monday, the trade ministry said, while Kyushu Railway Co, said it had halted operations on Kyushu and Japan Airline Co Ltd and ANA Holdings cancelled about 800 flights, public broadcaster NHK reported.

The storm was centered off the coast north of Shimane prefecture in western Honshu as of 0700 GMT and was heading northeast at about 35 km per hour (22 miles per hour), the JMA said.

The storm would track the coast to the north of Honshu into Tuesday before crossing overland and moving northeast out into
the Pacific, the agency projected.

Up to 400 mm (15.75 inches) of rain was expected in central Japan’s Tokai region, the nation’s industrial heartland, over the next 24 hours, it said.

Toyota Motor Corp was among manufacturers that said they would idle production at some factories due to the storm, but there were no reports of major damage to industry.

Intermittent bouts of heavy rain lashed Tokyo but businesses in the capital were largely operating as normal.

Most schools were closed on Monday anyway for a public holiday.

Related Topics:AsiaJapanTyphoon Nanmadol
Up Next