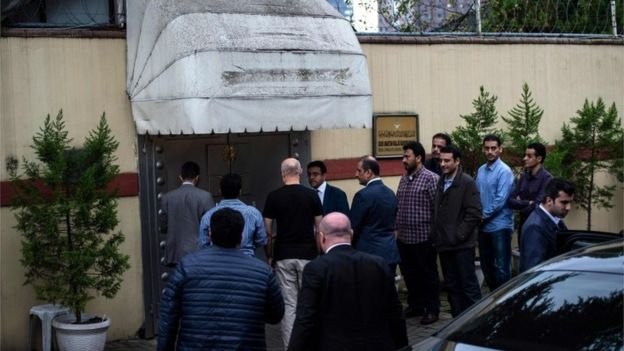 US President Donald Trump has suggested “rogue killers” could be behind the disappearance of Saudi journalist Jamal Khashoggi in Turkey.

Speaking to reporters after a phone call with King Salman, he said the Saudi leader had firmly denied knowing what had happened to Mr Khashoggi.

Turkish police have, for the first time, been inside the Saudi consulate where Mr Khashoggi was last seen.

They entered the building around an hour after a group of Saudi officials.

Turkish officials believe Mr Khashoggi was murdered in the consulate by Saudi agents nearly two weeks ago but Riyadh has always strongly denied this.

However, unconfirmed reports in the US media suggest Saudi Arabia is preparing to admit that Mr Khashoggi died as a result of an interrogation that went wrong and that the original intention had been to abduct him.

Meanwhile, Arabic channel Al-Jazeera quotes Turkey’s attorney-general’s office as saying it has found evidence to back claims that Mr Khashoggi was killed inside the mission.

The issue has strained Saudi Arabia’s ties with its closest Western allies.

“It sounded to me like maybe these could have been rogue killers,” he added. “Who knows?”

The president provided no evidence to back his comment.

A Turkish security source has told the BBC that officials have audio and video evidence proving Mr Khashoggi was murdered inside the building.

On Saturday, Mr Trump threatened Saudi Arabia with “severe punishment” if it emerged that Mr Khashoggi had been killed inside the consulate but ruled out halting big military contracts with Riyadh.

Secretary of State Pompeo’s visit to Saudi Arabia will be followed by a stop in Turkey.

How are the Saudis reacting?

Diplomatic pressure is growing on the Saudis to give a fuller explanation.

On Monday, King Salman ordered an investigation into the case.

“The king has ordered the public prosecutor to open an internal investigation into the Khashoggi matter based on the information from the joint team in Istanbul,” an official quoted by Reuters news agency said.

The official said the prosecutor had been instructed to work quickly.

On Sunday, Riyadh angrily rejected political and economic “threats” over the case of the missing journalist and said it would respond to any punitive action “with a bigger one”.

How was the consulate search conducted?

Turkish diplomatic sources had said the consulate would be searched by a joint Turkish-Saudi team.

A group of cleaners was seen entering earlier.

Yet another intriguing development at the Saudi Consulate today before Turkish police force arrival for inspection.

Cleaners inside the building where #Khashoggi vanished pic.twitter.com/gidlySU21E

Saudi Arabia agreed last week to allow Turkish officials to conduct a search but insisted it would only be a superficial “visual” inspection.

Turkey rejected that offer. The Sabah daily newspaper said investigators had wanted to search the building with luminol, a chemical which shows up any traces of blood. It is not clear whether that happened.

King Salman and Turkish President Recep Tayyip Erdogan spoke by telephone on Sunday evening, officials said, and stressed the importance of the two countries working together on the case.

Pompeo to meet Saudi King over disappearance of Khashoggi