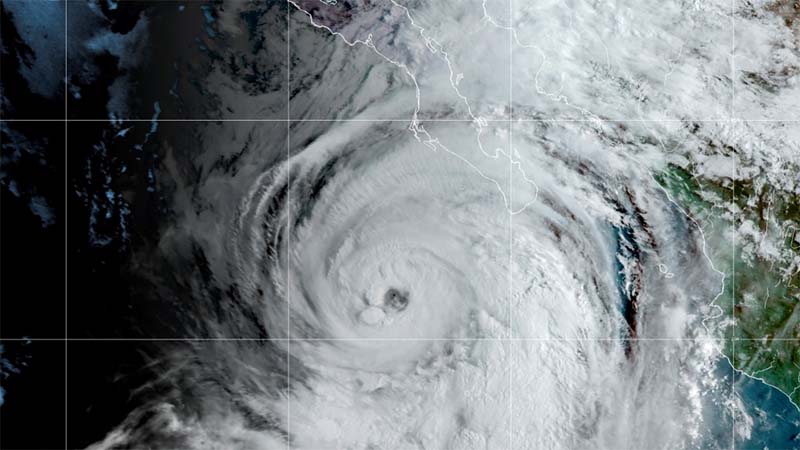 MEXICO CITY – Tropical Storm Kay dumped heavy rains on a sparsely populated peninsula on Mexico’s Pacific coast as it weakened while curling out to sea, and it was expected to bring rain to southernmost California by the weekend.

The eye of Kay came ashore as a hurricane near Mexico’s Bahia Asuncion in Baja California Sur state Thursday afternoon, but by evening it was a tropical storm with maximum sustained winds of 110 km/h (70 mph).

Kay then moved back out over open and cooler waters and was predicted to continue weakening. The storm was centered about 65 kilometres (40 miles) north of Punta Eugenia late Thursday and was moving north-northwest at 22 km/h (14 mph).

The U.S. National Hurricane Center in Miami said there was a chance the outer bands of the big storm could bring heavy rain – and possibly flash floods – to parts of parched Southern California and southwestern Arizona on Friday night and Saturday.

Ivory Small, a meteorologist with the National Weather Service in San Diego, said the storm was expected to affect the San Diego County area with somewhat less strength than a tropical storm. While the eye would remain well offshore, he said winds would be comparable to a moderate Santa Ana and could be strong enough to down tree branches.

Around an inch of rain was forecast for the coast and upwards of four inches in the mountains, “which is a lot of rain for September,” he said. The storm could also begin lowering temperatures around San Diego, which has been under an excessive heat warning.

The last time a hurricane or tropical storm came close to San Diego was Nora in 1997, which entered the U.S. as a tropical storm near Yuma, Ariz., and also brought about an inch of rain to the San Diego area, Small said.

The state government of Baja California Sur said more than 1,600 people had evacuated to shelters before Kay hit. It said some creeks had risen and closed some roads. Landslides reportedly cut some roadways on the peninsula, but there were no reports of injuries.

The mayor of the town of Mulege on the Gulf of California said Thursday morning that her town had been without water since Wednesday.

Meanwhile, Hurricane Earl swirled over open waters in the Atlantic Ocean and passed southeast of Bermuda late Thursday after weakening from a major Category 3 storm.

Earl was centred about 150 kilometres (95 miles) southeast of Bermuda late Thursday. It had maximum sustained winds of 150 km/h (90 mph) and was moving north-northeast at 24 km/h (15 mph).

“Bermuda will certainly feel the effects from Earl, so we must guard against complacency,” he said.

Weeks also warned of flooding in low-lying areas and noted that officials had opened a government shelter.