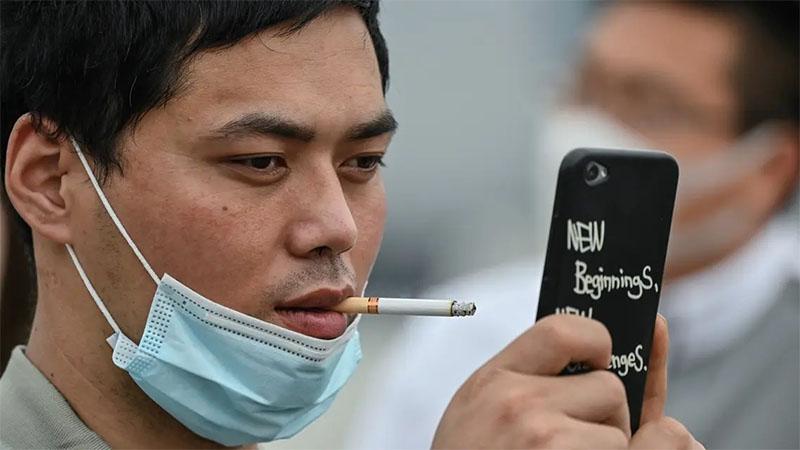 Tobacco companies “took advantage of COVID-19” to attract new smokers during the pandemic whilst progress to tackle the global tobacco epidemic is being threatened by the growing number of teenage smokers, a new report has revealed.

The latest edition of The Tobacco Atlas report that maps the global impact of the addictive habit said while countries diverted their attention to the COVID-19 crisis, the tobacco industry took “the opportunity to increase market shares, attract new customers, retain smokers and polish their corporate reputations”.

The Seventh Edition of the Tobacco Atlas, released by Vital Strategies and the Tobacconomics team at the University of Illinois at Chicago (UIC), finds that, although more people overall are being protected by effective regulatory interventions including tobacco taxes, smoke-free public areas, access restrictions and education, these efforts must be much more robust to contend with an industry whose gross profits climbed to at least US $60 billion in 2020.

Across the globe, the report reveals the stark statistics of the tobacco epidemic, with 1.1 billion smokers in the world and 200 million more who use other tobacco products.

The report said global progress is threatened by growing smoking rates among children aged between 13 to 15 years in many countries and by tobacco industry tactics such as targeting poorer countries with weak regulatory environments and pushing novel products in previously untapped markets.

“Now in its 20th year, the Tobacco Atlas is a warning call to all those who care about global health and economic development,” said Jeffrey Drope, Ph.D., Research Professor of Public Health at the University of Illinois at Chicago. “It demonstrates unequivocally that tobacco control works: For the first time on record, global smoking rates dropped, to 19.6 percent in 2019 from 22.6 percent in 2007.

“But uneven and anemic implementation of tobacco control measures means that richer countries are unlocking the economic and health benefits of strong tobacco control, while the industry is still preying on emerging economies in ways that will lock in harms for a generation or more.”

He added: “The tobacco industry is a relic whose business for growth still depends on hooking kids on one of the most addictive and harmful consumer products ever invented.

“An urgent and sustained effort is needed to aggressively regulate this harmful industry and its products to accelerate the end of cigarettes as a mass consumer product, save hundreds of millions of lives, and spur economic growth.”

The atlas identifies devastating health and economic costs of global tobacco use:

Most deaths were attributable to smoking, but 1.3 million died from secondhand smoke exposure.

Youth tobacco use (girls and/or boys) has increased in 63 of 135 countries surveyed, and now more than 50 million 13-to15-year-olds smoke cigarettes or use smokeless tobacco products.

“In the wake of COVID-19, countries are reprioritizing public health and investing in strategies to support health and economic growth,” said Nandita Murukutla, Ph.D., Vice President of Research at Vital Strategies. “For countries that want to recover, tobacco control should be high on their agendas.

“In particular, tobacco taxes are a triple win for health. driving down smoking rates, deterring initiation among youth, and generating revenue that can pay for other health interventions.

“Graphic pack warnings and plain packaging are proven high-impact, low-cost interventions. Plus, media campaigns can reshape social norms and drive millions to quit at extremely low cost; almost every country in the world is underinvested in media.”

Dr. Kelly Henning, who leads the Public Health program at Bloomberg Philanthropies, also voiced her concern, in the report.

“Global leaders must accelerate tobacco control efforts to protect the health of our youngest generations,” she said. “Tobacco use is a major risk factor for the world’s leading killers including cancer, heart disease, lung disease and diabetes. The faster countries can regulate tobacco and prevent youth from starting, the more lives that can be saved.”

The report also examined the rising popularity of e-cigarettes and heated tobacco products —particularly among youth and nonsmokers—with rapid growth across the spectrum of e-cigarette products, which are gaining market share in some countries.

Dramatic increases in initiation among young people, strong evidence of aggressive industry marketing of these products to youth and nonsmokers, and use of child-friendly flavors (e.g., fruit, candy, mint)—often in contexts where youth smoking was declining—have generated enormous concern and controversy.

In the US, use among young people peaked shortly before the COVID-19 pandemic at 27 percent among high school students (those reporting any e-cigarette use in the previous 30 days).