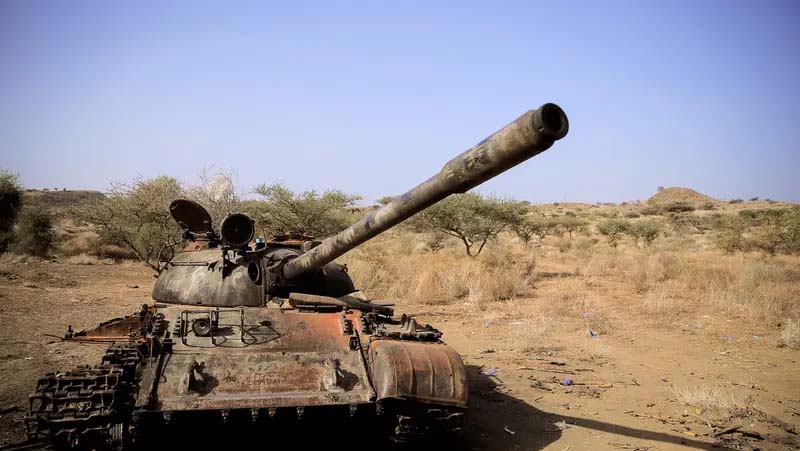 Forces in Ethiopia’s Tigray region said troops from neighboring Eritrea started a full-scale offensive on Tuesday and heavy fighting was taking place in several areas along the border.

Two aid workers also reported intense fighting along the border, including shelling into a displaced persons camp on the outskirts of the village of Ziban Gedena. They did not say whether Eritrean troops were on the ground in Tigray.

If confirmed, the participation of Eritrean troops would mark an escalation in a conflict that was reignited last month after the collapse of a ceasefire in place since March.

The US special envoy for the Horn of Africa, Mike Hammer, said on Tuesday the United States was aware of Eritrean troops crossing into Ethiopia’s Tigray region and condemned it.

Eritrea had withdrawn its troops from most areas in Tigray last year after they supported the Ethiopian military in earlier phases of a war against Tigrayan forces which erupted in November 2020.

“Eritrea is deploying its entire army as well as reservists. Our forces are heroically defending their positions,” Getachew Reda, a spokesman for the Tigray People’s Liberation Front (TPLF), said on Twitter.

Eritrean Information Minister Yemane Gebremeskel did not immediately respond to requests for comment.

Getachew said Ethiopian troops and special forces from the Amhara region to the south had also joined the offensive.

Gizachew Muluneh, spokesperson for the Amhara regional government, also did not immediately respond to a request for comment.

The two-year-old war in Tigray has already killed thousands, displaced millions and created a humanitarian disaster in northern Ethiopia.

On Saturday the Canadian government warned that Eritrea was mobilizing armed forces due to the resumption of fighting in Tigray, where a ceasefire in place since March broke down on Aug. 24.

Eritrea’s Yemane confirmed over the weekend that some reservists were called up but said the government was not mobilizing the entire population.

Ethiopian residents and aid workers previously reported that Eritrean troops had shelled the towns of Shiraro and Adigrat earlier this month.

According to a United Nations document seen by Reuters on Monday, more than 200,000 people have fled the most recent fighting.

Also on Monday, a UN human rights commission said it had reasonable grounds to believe that Ethiopia’s government was “using starvation as a method of warfare.”

The commission also said it had reasonable grounds to believe that war crimes had been committed by forces from both sides of the conflict.

Spokespersons for the Ethiopian and Eritrean governments and for the Tigrayan forces did not respond to requests for comment about the report. Ethiopia’s government has previously called the commission’s investigation “politically motivated.”