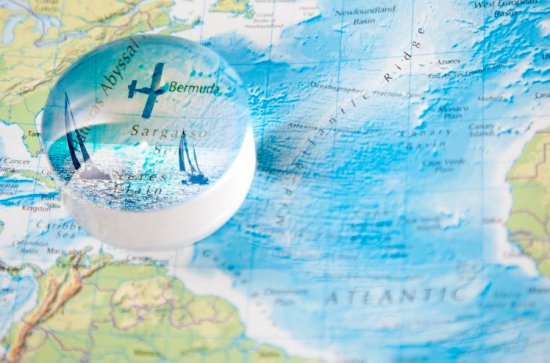 Stretching over 700,000km of sea between Florida, Puerto Rico and the island of Bermuda, the area of sea has supposedly claimed 1,000 lives in 100 years.

Several planes and ships have mysteriously vanished over the much-feared stretch of water.

And the reason why has long-stumped experts and concerned sailors.

But now Australian scientist Dr Karl Kruszelnicki has told News.com.au that the incidents were likely caused by nothing more than human error.

‘According to Lloyds of London and the US coast guard, the number of planes that go missing in the Bermuda Triangle is the same as anywhere in the world on a percentage basis,’ Dr Kruszelnicki said.

The first mystery disappearance took place in 1918, when the USS Cyclops, a large carrier ship that supplied fuel to American ships in WWI, failed to arrive in Baltimore from Barbados.

But despite search teams’ best efforts, the ship and its 309 crew members, were never found.

Dr Kruszelnicki suggested the fact the Triangle is one of the most heavily travelled shipping lanes in the world, could explain why it has such a high death toll.

‘It is close to the equator, near a wealthy part of the world, America, therefore you have a lot of traffic,’ he said.

In another incident, five TBM Torpedo Bombers, known as Flight 19, disappeared after taking off from a Naval Air station in Florida on December 5, 1945.

But Dr Kruszelnicki said Flight 19’s leader Lieutenant Charles Taylor was hungover and was told to go west but instead chose to continue flying east.

‘(Lt. Taylor) arrived with a hangover, flew off without a watch, and had a history of getting lost and ditching his plane twice before.’