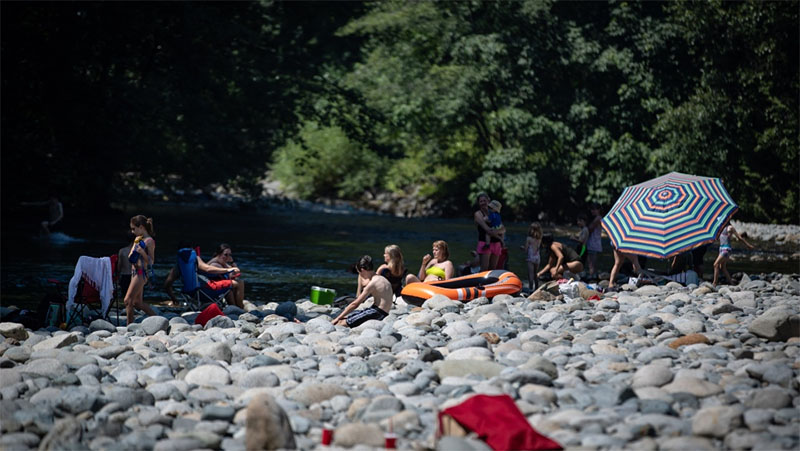 Cities across British Columbia broke at least 59 previous temperature records, including Lytton, B.C., where Canada-wide records have been set and broken in rapid succession.

“Lytton, three days in a row broke records. Now 49.6 C, by gosh, it’s only about seven degrees away from the historic all-time highest temperature on the face of the Earth which was in Death Valley, California,” Dave Phillips, meteorologist with Environment Canada, told CTV’s Your Morning.

The heat dome over western Canada is to blame for the soaring temperatures.

“The cause of it is this gigantic dome, it is like putting the Rogers Centre or B.C. Place right over top of an area that stretches from the Arctic Circle down to Death Valley,” he said.

This dome effect traps the hot air inside, and keeps other weather systems out.

“The air is trapped in there,” he added. “It’s like a lid or a top, and nothing can get in, weather can’t get in to remove that heat, it just builds.”

And Lytton, B.C. is seeing the highest temperatures because of the geography of the area, says Phillips.

“It’s caught between the Coast Mountains on the west coast, and the Cascade Mountains in the interior. So it’s almost like a Death Valley there in terms of: it’s hot, it’s like sagebrush country, it’s as close to the desert as we can get. And boy, they are now claiming victory in terms of the warmest moment in Canadian history.”

Rachel White, an assistant professor with the University of British Columbia’s department of earth, ocean and atmospheric sciences, told CTV News Channel that these temperature records are “hugely unprecedented.”

“Before this heat wave, the records stood at 45 C, and that was in 1937. So this is the hottest temperatures Canada has ever experienced in modern times,” White said in an interview on Wednesday.

White explained that the main problem with this weather pattern is that it has stalled over one region.

“It’s staying in one place, and so it’s stuck over this region of British Columbia… and that’s causing these slowly increasing temperatures gradually breaking these records again and again,” she said.

White noted that climate change “obviously” has something to do with the extreme heat.

“We know that we’re just going to get more and more extremes as temperature of the planet keeps warming,” she said.

However, she noted that global warming is also making severe weather patterns more persistent on a global scale.

“These high pressure systems that stall and stay in one place actually might be staying in one place longer because of climate change, and so that’s particularly worrying in terms of what this means for the future,” White said.

One Lytton, B.C. resident without air conditioning, who has been dealing with the town’s high temperatures for years, has worked hard to master staying cool.

“I stay inside a lot. I have fans going in my house, in the evenings I open up the house wide until morning and when the sun comes up, the temperature starts rising. We shut the house up, lock the windows, close up the house, try to keep it cool,” Denise O’Connor told CTV’s Your Morning.

While temperatures in the town broke records, she’s not surprised by the heat. She’s dealt with it all her life.

“Every summer it gets to be close to 40 degrees. And so I’ve learned from my mother, who taught us young, that’s how you deal with the heat,” O’Connor said.

Temperatures in B.C. are just beginning to lower, with temperatures in Victoria not exceeding 30 yesterday, and Vancouver is expected to stay below 30 today, but the heat dome is just moving to the east.

“We’re seeing it’s sort of slowly getting better in British Columbia, but it’s going to worsen in Alberta and Saskatchewan and into Manitoba,” said Phillips. “We’re going to see record high temperatures, so this thing isn’t going to go away until probably sometime next week.”