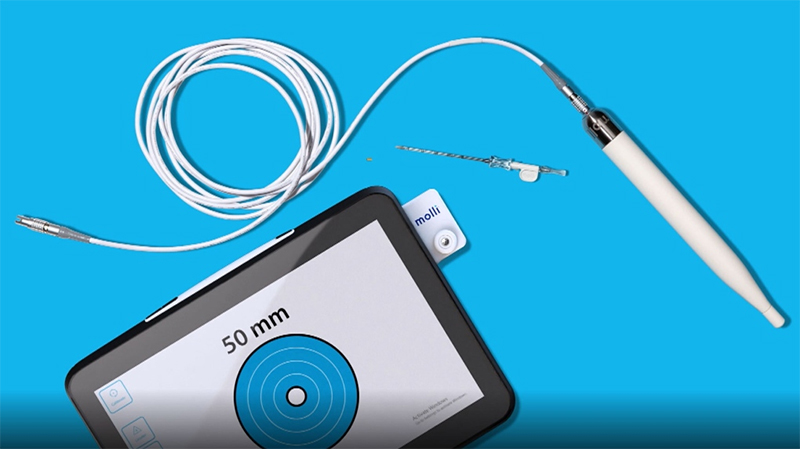 New Canadian technology is allowing surgeons to more easily remove breast cancer tumours with minimal cosmetic defect and less pain for patients. And this tech is the size of a sesame seed.

The miniature localization application developed by Molli Surgical and Sunnybrook Health Sciences Centre has been approved by Health Canada and FDA-cleared for commercial use.

“We’re all about making the entire process of delivering breast cancer care simpler,” Anath Ravi, president and CEO of Molli Surgical, told CTV’s Your Morning on Tuesday. “Simpler for the patient. Simpler for the radiologist who has to find the tumour and mark it for removal. And simpler for the surgeon who has to take out the tumour.”

Through implanting a miniature marking device, also called a radioactive “pellet” or “seed,” radiologists and surgeons are able to locate tumorous regions for removal. With a hand-held radiation detector, also called a “magic wand,” surgeons can then precisely remove tumours with minimal damage to flesh.

The amount of radiation given off by this marking device – again, which is the size of a sesame seed — is less than the amount emitted from standard X-rays.

“It benefits the patient because it gives them the confidence that the surgeon has the tools to remove the cancer with minimal cosmetic defect,” Ravi explained.

Angela Alexander-Roper, one of the earliest patients to receive treatment from this new technology, told Your Morning that the seed localization procedure was “absolutely painless.”

“When I had the lumpectomy there was very little tissue taken out. You know, there’s a small amount but very, very little,” she said.

Alexander-Roper found a lump on the upper side of her right breast during a soft examination in May. She found it two months after a routine mammogram that did not detect any tumours.

“Of course it was very frightening,” she recalled. “I got in touch with my doctor straight away and she organized an ultrasound for me and that showed that there was something not quite right. I was sent on to have more in-depth examination. I had a biopsy. It came back with a marker so it looked like it wasn’t quite right.”

After her treatment team decided to do a lumpectomy, Alexander-Roper opted to have the seed implanted instead of the older procedure, which involved a radiologist inserting an intrusive wire to locate abnormal areas in the breast.

“It really made me feel a lot better. The people that were involved in the insertion of it were all very kind. And then I had another mammogram to make sure it was settled and in the right spot and then [the doctor] did the lumpectomy and he was able to get all of the margins. He was able to tell my husband right away that everything was fine. It was just a tremendous relief for me.”

Upon hearing that Alexander-Roper’s experience with this new procedure was seamless, Ravi said these results are “everything.”

“It’s the reason why our team is toiling to bring this technology to Canadians close to home. We have a team of young innovators and this motivates them to keep looking for ways to improve the experience not only for patients but also for care teams which we know are completely overburdened taking care of patients. This is everything to us.”

Alexander-Roper is now “good to go,” according to her doctor.

“I just need to get a mammogram every couple of years again. So that’s OK with me.”