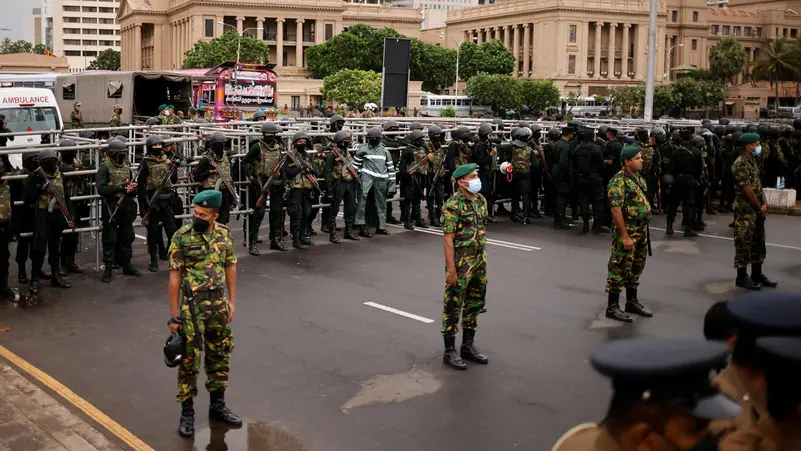 Gotabaya Rajapaksa was forced to flee when tens of thousands of protesters, incensed by the island nation’s unprecedented economic crisis, stormed his residence in the capital Colombo.

He later flew to Singapore and tendered his resignation while his successor Ranil Wickremesinghe declared a state of emergency and vowed a tough line against “trouble-makers.”

Police said in separate Wednesday statements that they had arrested activists Kusal Sandaruwan and Weranga Pushpika on unlawful assembly charges.

After Rajapaksa fled, Sandaruwan was seen in social media footage counting a large cache of banknotes found in the president’s home.

Police have also released photographs of 14 suspects wanted in connection with an arson attack on Wickremesinghe’s home on the same day the president’s office and residence were overrun.

Police said there was a warrant for his arrest in connection with a magistrate’s court case, without giving further details.

Lawmakers also voted Wednesday to formalize the state of emergency imposed by Wickremesinghe until mid-August.

The emergency ordinance, which empowers troops to arrest and detain suspects for long periods, would have lapsed on Wednesday if it had not been ratified by parliament.

Public anger simmered for months in Sri Lanka before the huge demonstration on July 9 that brought an end to Rajapaksa’s rule.

He had been blamed for mismanaging the nation’s finances and steering the economy into a tailspin after the country ran out of foreign currency needed to import vital goods.

Protesters had also demanded the resignation of Wickremesinghe and accused him of protecting the Rajapaksa clan, who have dominated Sri Lankan politics for much of the last two decades.