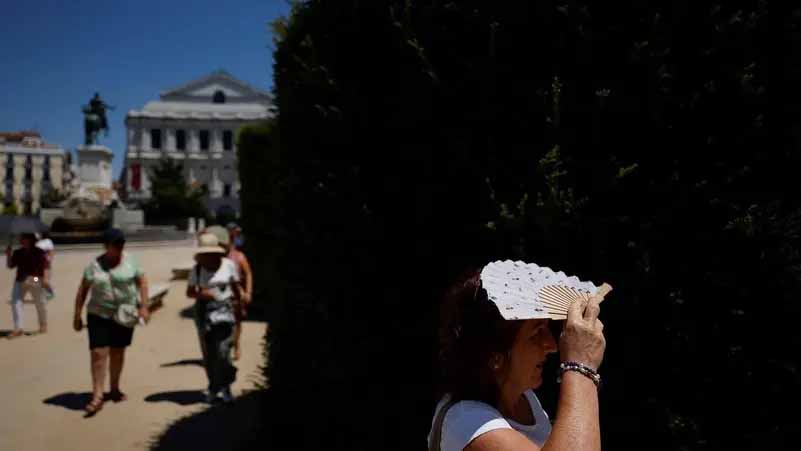 Spaniards stayed in the shade in parks, headed for the beach or sipped iced drinks to tackle stifling temperatures as high as 43 degrees Celsius (110 Fahrenheit), as the country experiences its second heatwave this year.

Warm summer sunshine combined with a hot air front from North Africa have sent temperatures soaring, state meteorological forecasters AEMET said on Sunday, and the heatwave could last until July 14.

The highest recorded temperature on Sunday was 43 degrees Celsius (110 Fahrenheit) by the Guadalquivir river near Seville in southern Spain and in Badajoz, towards the west of the country, forecasters said.

For Rasha, 45, a Syrian health executive who lives in Abu Dhabi, the heatwave was an unwelcome surprise on holiday.

“It’s not as enjoyable as we would like it to be on a holiday but it is what it is. But compared to the desert it is not that bad,” she told Reuters.

Lazaro Cun, 37, a builder from Guatemala, stayed in the shade in Madrid’s Casa de Campo Park to escape the heat.

“It is hot but at least with a breeze you feel better,” he said.

“They could also reach 42 degrees Celsius in parts of (central Spain) like Castille and Leon and Galicia (in central and western Spain) on Tuesday and Wednesday.”

Del Campo advised people to avoid excessive physical activity, to take care of elderly people with conditions which meant they were sensitive to high temperatures, and to drink plenty of water.

He said there was also a high risk of forest fires during the heatwave.