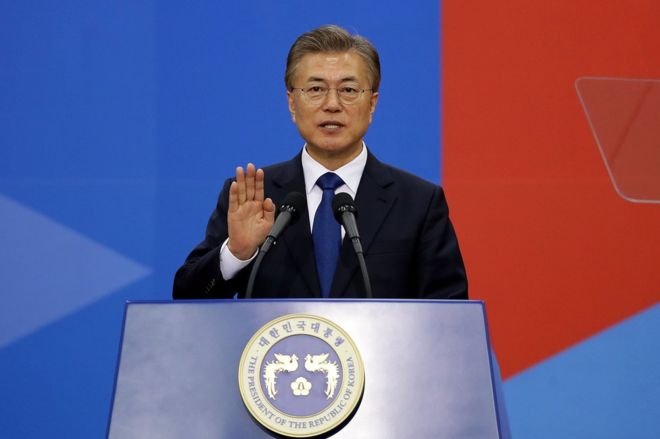 South Korea’s new leader Moon Jae-in has been sworn in, vowing to address the economy and relations with the North in his first speech as president.

He said that he would even be willing to visit Pyongyang under the right circumstances.

Mr Moon took his oath of office in Seoul’s National Assembly building a day after his decisive win.

The former human rights lawyer and son of North Korean refugees is known for his liberal views.

Tensions on the Korean peninsula remain high and recent weeks have seen the US and Pyongyang trade angry rhetoric as speculation about another nuclear test grows.

Mr Moon has also vowed to unify a divided country reeling from a corruption scandal which saw his predecessor, Park Geun-hye, impeached.

In his inauguration speech, Mr Moon said he would “do everything I can to build peace on the Korean peninsula”.

“If needed I will fly to Washington immediately,” he said. “I will also go to Beijing and Tokyo and even Pyongyang in the right circumstances.”

He added that he would have “serious negotiations” with the US and China over the controversial deployment of anti-missile system Thaad.