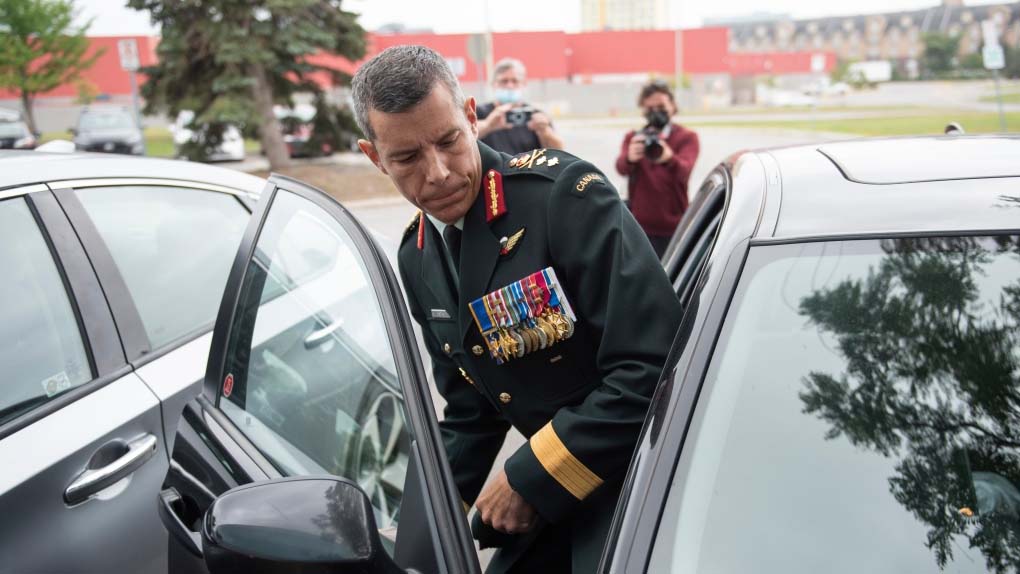 The complainant in the sexual assault trial against Maj.-Gen. Dany Fortin testified on Monday that she woke up to the alleged assault one night in early 1988.

The trial is taking place in a Gatineau, Que., courtroom Monday and Tuesday, more than a year after Fortin was charged with one count of sexual assault in August 2021.

Fortin maintains his innocence and his defence lawyer said Monday they will vigorously contest the complainant’s testimony that he assaulted her.

He was abruptly removed as head of the federal government’s COVID-19 vaccine campaign in May 2021 over an unspecified “military investigation,” and his case was referred to Quebec’s prosecution service later that month.

At the time of the alleged assault, described as taking place between January and April 1988, the complainant and Fortin were attending military college in St-Jean-sur-Richelieu, Que., she told Crown prosecutor Diane Legault.

The complainant testified in English that she was living in a barracks with a female roommate and there was a rule that their door should stay unlocked.

She said she was lying down on her side and froze in panic and shock as she realized the position she was in. Before doing anything else, she testified, she opened one eye and recognized Fortin leaning over her.

After signalling to him that she had woken up by shifting her position and pulling away, she said she began to push him and whispered, “Get off me.” She said also whispered her roommate’s first name, as she thought she was also in the room, and was trying to get her attention. She told the court that after a brief struggle, Fortin backed off, pulled his pants up and left.

Asked why she did not scream, the complainant sighed and took a long pause before saying that it was an embarrassing situation. She said she knew that “this type of thing has happened to others” at the college and “the ramifications of what happens when it is reported.”

“I’m horrified. I don’t want anybody running in and finding me in that position. Somebody doing that to me, demeaning me,” she said, describing her thought process in the moment. “I was hoping with (my roommate) there and telling him to stop that that in itself, the fear of that, would be enough to get him to leave me alone.”

She testified that after Fortin left, she got herself together, got dressed and went to see her boyfriend, who lived in another barracks, and told him what happened to her and who had done it.

She didn’t make a formal complaint until after the Canadian Armed Forces initiated “Operation Honour,” a since-replaced effort to address what a 2015 report by former Supreme Court justice Marie Deschamps described as a rampant culture of sexual misconduct in the military.

The complainant testified that in 2017 or 2018, she encountered Fortin again. She said he acted as though nothing had ever happened between them.

“I couldn’t take it,” she said, adding that now there was a system in place that was “finally supposed to protect” her. “After 34 years, I was not about to be ashamed and embarrassed for something that was not my fault.”

The complainant told the court she was “100 per cent” sure on the identity of the perpetrator. Fortin’s lawyer Isabel Schurman said the defence would be vigorously contesting that identification.

During her cross-examination, Schurman highlighted inconsistencies in the complainant’s recollection of details. That included which year she said the alleged assault took place, whether it had happened before or after midnight, whether she had recognized Fortin by his voice and whether her roommate was present at the time.

The complainant said that despite interviews in which she stated to authorities that the incident may have taken place in 1989 or 1987, she was always clear on which year of her studies she was undertaking at the time.

She said that she was aware of her roommate being in the room earlier in the night and that she assumed her to be present later, but that the roommate later denied witnessing anything.

The defence referred to an interview the complainant had given to an investigator last year, when she suggested she had recognized Fortin’s voice and his French accent during the incident. But the complainant testified on Monday that Fortin never spoke during the interaction.

The complainant’s name and details that could identify her are under a publication ban.

Fortin wore his military uniform in the courtroom on Monday and watched the complainant as she testified, sometimes looking down at his hands folded in his lap.

In addition to the criminal trial, which is being heard by Judge Richard Meredith without a jury, Fortin is challenging his removal from the vaccine campaign in Federal Court.

Fortin has accused Prime Minister Justin Trudeau and other senior members of the Liberal government of having turfed him from the vaccine campaign for purely political reasons.

While his request for reinstatement was denied last year, an appeal is scheduled to be heard early next month.