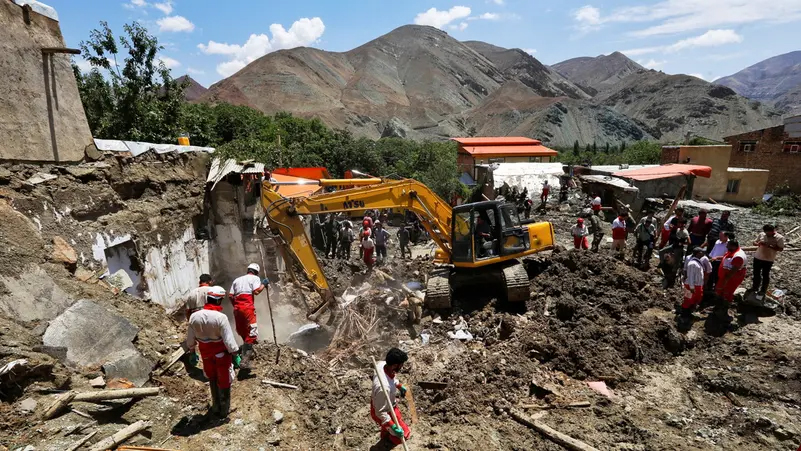 The official IRNA news agency said the tourists were part of a 13-member group of Iraqis visiting Iran. They were traveling in a crammed station wagon on a road near the city of Mashhad, some 900 kilometers, north of the capital Tehran, when a flash flood swept their car away.

Among the fatalities were five women and the group’s Iranian driver. Three Iraqis were missing while the other passengers managed to get to safety.

Also Saturday, Iranian authorities raised the death toll from landslides and flash floods that engulfed the country since Thursday to 61 as eight more bodied were retrieved. It said at least 32 people are still missing.

Iranian President Ebrahim Raisi visited a rescue operation center in one of the stricken villages northeast of Tehran, promising more help for the area.

There were fears the death toll could rise even further as more bodies are being uncovered as the rains abate. Thousands have been transferred from remote areas to safer places.

Last Saturday, flash floods in Iran’s drought-stricken southern Fars province killed at least 22 people and affected about a dozen villages in the province. Authorities have warned about heavy rains and possible floods.

This week’s storm is the deadliest among Iran’s rain-related incidents in the last decade. In 2019, a flashflood killed at least 21 people in the southern city of Shiraz, and two years earlier, a similar storm claimed 48 lives in northwestern Iran.

Authorities have blamed the high death tolls on a wide disregard of safety measures by people who venture out in the storms while critics cite mismanagement in construction projects as well as late warnings as other causes.