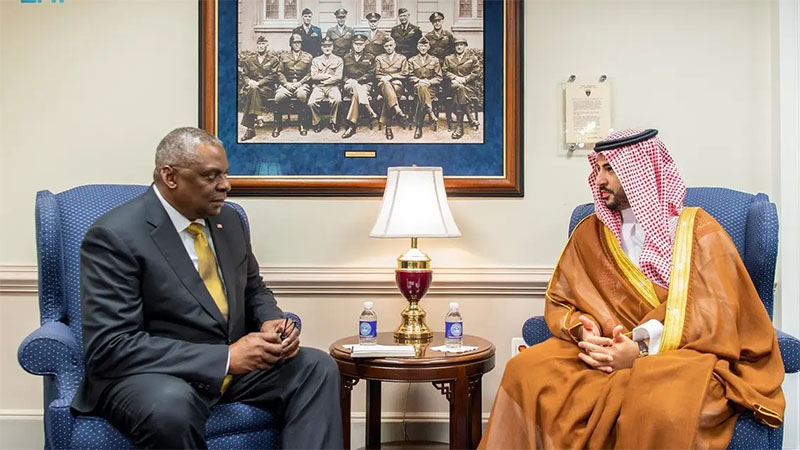 Saudi Arabia’s Deputy Minister of Defense Prince Khalid Bin Salman has met with US Secretary of Defense Lloyd Austin during his US visit to Washington, the Saudi Press Agency (SPA) reported on Thursday.

During the meeting, they discussed the strategic relations between the two countries, in addition to reviewing the Saudi-US partnership and aspects of strategic cooperation in the existing and future defense and military fields.

Prince Khalid bin Salman bin Abdulaziz expressed the Kingdom’s appreciation for the close cooperation between the two countries’ defense ministries, and for the efforts of US Defense Secretary Lloyd Austin to promote the two countries’ common interests and enhance security and peace at the regional and international levels.

Prince Khalid also headed the Saudi side in the meeting of the Joint Strategic Planning Committee between the Ministries of Defense in the Kingdom of Saudi Arabia and the United States of America as the Under Secretary of Defense for Policy Dr. Colin H. Kahl headed the US side.

During the meeting, the latest developments and the rapid regional and international changes were discussed, in addition to discussing many issues and files as part of the two countries’ vision to defend common interests and maintain international peace and security.

During the meeting Sullivan also underscored the longstanding partnership between the two nations, the White House said in a written statement.

Pentagon finds no wrongdoing in 2019 Syria strike that killed civilians