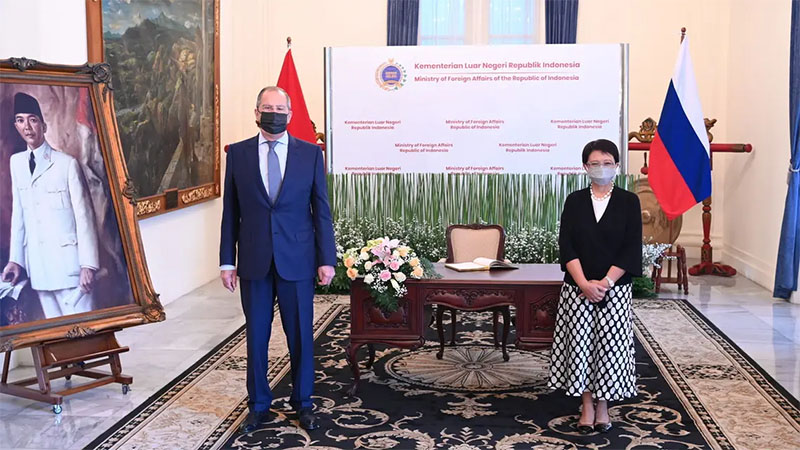 Russia’s top diplomat expressed his backing for Southeast Asian efforts toward achieving peace in Myanmar on his visit Tuesday to Indonesia to demonstrate the region’s importance to Moscow.

Russian Foreign Minister Sergei Lavrov, on a four-day visit to Southeast Asian countries, arrived in Jakarta on Monday from Brunei, where he met with Brunei’s Sultan Hassanal Bolkiah, this year’s chair of the Association of Southeast Asian Nations.

After holding talks with his Indonesian counterpart Retno Marsudi, Lavrov said he briefed Marsudi on the messages Russia has sent to Myanmar’s military leaders and told Marsudi that Russia considered the ASEAN position “a basis for restoring the situation back to normalcy.”

At their joint video news conference, Marsudi emphasized the importance of following up on the five-point consensus to which ASEAN and Myanmar’s military leader agreed in April and asked Russia to support its implementation.

“This requires the commitment of Myanmar’s military to cooperate with other ASEAN member countries,” she said.

The five-point consensus called for violence to end immediately and for the start of constructive dialogue to find a peaceful solution “in the interests of the people.” It was also agreed that a special envoy of the ASEAN chair will mediate in the talks.

“We reiterated our strong support for the ASEAN’s five principles,” Lavrov said.

Lavrov also affirmed a deepening of economic and political ties with Indonesia, which will hold the G-20 presidency next year, and the two officials also discussed preparation for President Vladimir Putin’s visit to Indonesia later this year.

The two officials also discussed the challenges caused by the coronavirus pandemic in the Asia-Pacific region and the world.

Surging infections have strained Indonesia’s health care system while it also struggles to roll out vaccinations.

Lavrov and Marsudi are scheduled to co-chair a video meeting with other ASEAN foreign ministers before the Russian envoy departs for another Southeast Asia country, Laos.