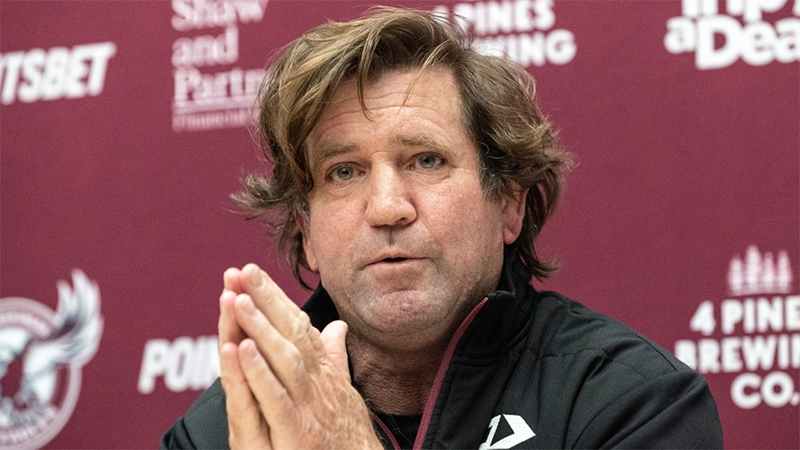 The jersey has rainbow stripes and a rainbow collar — in place of the regular white sections — to support LGBTQ2S+ inclusion in sports, and the club plans to use it for one game against Sydney Roosters.

“The players will not play on Thursday and we accept their decision,” Hasler said. “These young men are strong in their beliefs and convictions and we will give them the space and support they require.

“The playing group are solid and understanding of each other’s views. As a club we will wear the jersey on Thursday night.”

Hasler apologized for the fallout which stemmed from the club’s lack of advance consultation with the playing group.

“Our intent was to be caring towards all diverse groups who face inclusion issues daily,” Hasler said. “Sadly this poor management has caused significant confusion, discomfort and pain for many people, in particular those groups whose human rights we in fact attempting to support.

“We wish to apologize to the LGBTQ community who embrace the rainbow colours, who use these colours for Pride and advocacy and human rights issues.”

Australian Rugby League Commission chairman Peter V’landys said he understood the players’ choices, based on religious and cultural differences, but pushed for inclusion and acceptance in the sport.

“One thing I take pride in with rugby league is we treat everyone the same,” V’landys said. “It doesn’t matter your colour, sexual orientation or race. We’re all equal.

“We’ll never take a backward step in having our sport inclusive. But at the same time we will not disrespect our players’ freedoms.”

The NRL does not have a designated Pride round, but V’landys said it could be a consideration for future seasons.

Andrew Purchas, co-founder of the Pride In Sport program that supports Australian sports clubs in aspects of inclusion, acknowledged the apology from the Sea Eagles.

“Conversation, education and building understanding are key to respectfully moving forward on these important discussions in our communities,” Purchas said in a statement. “At its most basic, a Pride jersey signals a fundamental value: everyone should feel safe to play.

“We strongly support the NRL in its endeavours to continue to uphold values associated with inclusivity, safety and belonging, and we would urge all people to think about these as non-controversial values we can unify around.”

The Sea Eagles are in ninth place in the NRL, one spot below the Roosters. The top eight teams qualify for the playoffs.

Manly was the only club planning to wear a Pride jersey in this round.

Former Manly forward Ian Roberts, who in the 1990s was the first high-profile rugby league player to come out as gay, said he was not surprised by the players’ decision.

“It hasn’t totally shocked me like it’s shocking everyone else,” he told the Sydney Morning Herald. “As an older gay man I’m used to this. I expected there would be some sort of religious pushback.”

The jersey boycott dominated coverage of the NRL after it was reported late Monday by Sydney’s Daily Telegraph, with criticism both for the boycott and for the club’s lack of consultation with players.

The newspaper said players were not aware they would be expected to wear the jersey until after it was shown to the media.

NRL rules would not allow the players to wear an alternate jersey without the rainbow messaging because match regulations require all players in a team to wear an identical strip.

The Pride jerseys were a hit with fans, with local media reporting the club had sold out of initial stock of all men’s and women’s sizes.

Players in other sports previously have refused to wear jerseys with advertising or messages which conflict with their beliefs. In 2016, cricketer Fawad Ahmed was allowed to play in a jersey which did not carry the logo of the Australian team’s beer sponsor because of his objection to alcohol for religious reasons.