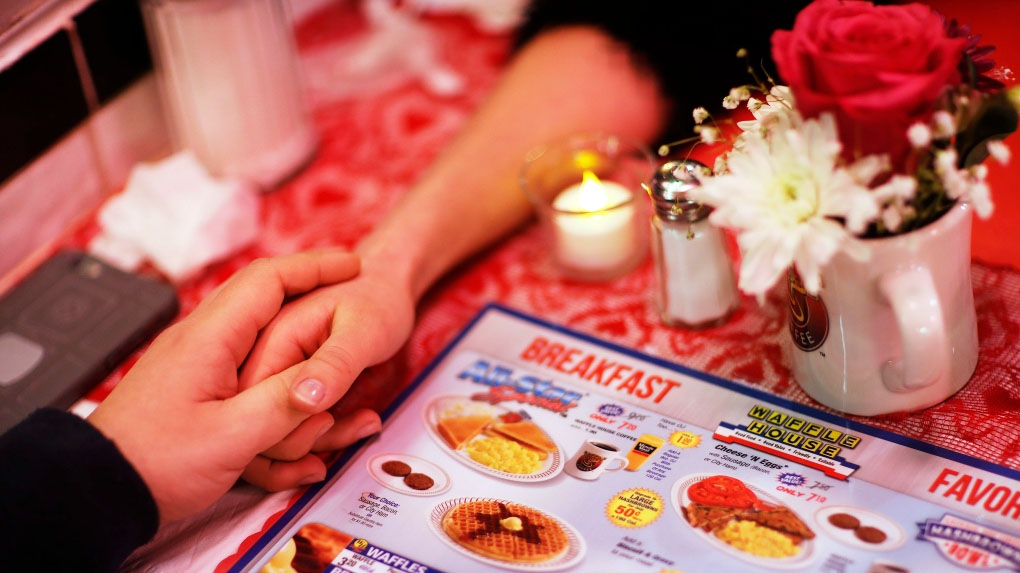 HALIFAX – It’s one of the few celebrations that draws people to restaurants in the depths of winter.
Yet some eateries are bracing for another lacklustre Valentine’s Day amid ongoing physical distancing rules, capacity restrictions and uncertainty.

“It’s not going to be a good night,” says Bill Pratt, a veteran chef and CEO of Chef Inspired Group of Restaurants, which operates multiple full-service and quick-service restaurants and food trucks in Nova Scotia and New Brunswick.

“Sales dip dramatically in the winter so we need Valentine’s Day to help carry us through. But it will be even worse than a regular night because everyone’s in twos.”

Since most diners are couples rather than larger groups and physical distancing applies to the distance between tables, Pratt says, the math gets complicated pretty quickly.

His Studio East Restaurant in Halifax, for example, can currently accommodate about 80 to 100 customers under existing COVID-19 restrictions.

But on Feb. 14, even though capacity limits in Nova Scotia will rise to 75 per cent from 50 per cent, Pratt said the Asian Gastropub has cut off reservations at 42 people.

“The reservations are all for couples — not groups of friends or families — and we still need to maintain six feet between tables,” he said. “I can’t do anything with my tables of four and six, I can’t move them around, I’m stuck.”

Pratt added: “We’re going to follow all the rules. But we had such a horrific year last year, we just need to get back to some sort of normalcy.”

Thousands of restaurants have permanently closed during the pandemic.

Others have survived through a mix of subsidies, debt and sheer grit only to now face spiralling inflation, labour shortages and perpetual uncertainty.

“Most restaurants in Canada received a significant number of cancellations in December because of Omicron,” Mark von Schellwitz, vice-president of Western Canada with Restaurants Canada, said in an interview.

“It makes occasions like Valentine’s Day this year that much more important.”

Yet while restaurant dining rooms are open across the country, most continue to face restrictions ranging from capacity limits and physical distancing to vaccine passports.

Restaurants that have lost 25 per cent of their revenue in the past month, compared with 2019, can receive wage and rent subsidies from the federal government — if they are in a region where a public health order locked them down or reduced their operations by half.

If they are not in one of those regions, then can still qualify for subsidies through the federal government’s Tourism and Hospitality Recovery Program. Among other requirements, restaurants have to have lost 40 per cent of normal revenues.

But eateries still have to pay for 100 per cent of other costs, including insurance, utilities and garbage collection.

Moreover, food and shipping costs are soaring — another major expense for restaurants.

Despite crushing inflation and ongoing restrictions, many restaurateurs are increasingly hopeful.

New COVID-19 infections and hospitalizations are slowly decreasing across Canada and many provinces have announced the gradual lifting of restrictions, from easing of capacity limits to doing away with proof-of-vaccine rules.

Alberta ended its vaccine passport system this week, while Saskatchewan will follow suit on Valentine’s Day.

For some restaurant operators, the lifting of restrictions offers a glimmer of hope that a return to more typical business operations is coming soon.

“It’s about time,” said Leslie Echino, owner and operator of Annabelle’s kitchen, which has two locations in Calgary.

“Everybody I talked to is beyond excited to get people back in the seats. Very few people are apprehensive.”

She added that while provincial rules limit groups to 10 people or fewer per table and prevent mingling between tables, there are no longer capacity restrictions on restaurants.

“My neighbourhood restaurant is absolutely rammed full — packed,” Echino said. “People are really excited to get out.”

The reopening buzz is echoed in other provinces that have loosened restrictions on eateries — among the hardest hit businesses during the pandemic.

“It would be better if we didn’t have the capacity limits at all but it should still be a good night.”

“We need to think outside the box because we cannot expect restaurants to close down again,” he said. “We need to give our workers some stability.”