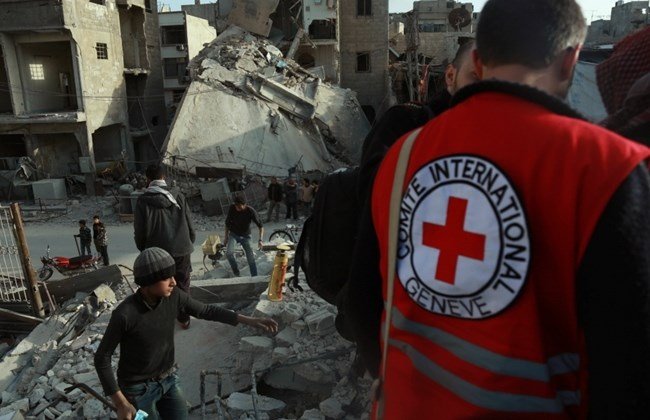 BEIRUT – A second convoy with desperately needed aid for the besieged rebel-held eastern suburbs of Damascus was postponed Thursday because of the violence and a rapidly evolving situation on the ground, the International Committee of the Red Cross said.

The postponement came as Syrian government forces intensified their offensive on the area, known as eastern Ghouta, under the cover of airstrikes.

The government forces seized more than half of the area, including a stretch of farmland Wednesday, effectively dividing the besieged enclave in two and further squeezing the rebels and tens of thousands of civilians trapped inside, state media and a war monitor reported.

The government forces advanced from the east and were now nearly a mile away from forces on the western side of eastern Ghouta, cutting links between the rebels in northern and southern parts of the suburb. The military gains have caused wide-scale internal displacement as civilians flee government advances toward areas in the territory still held by the rebels.

The most densely populated areas in eastern Ghouta are still under rebel control, including the towns of Douma, Harasta, Kfar Batna, Saqba and Hammourieh.

The government, determined to wrest the eastern Ghouta suburbs from the control of rebels after seven years of war, has intensified the shelling and bombardment to clear the way for its troops to advance on the ground. Hundreds have been killed in the past two weeks, including dozens of fatalities reported on Wednesday. Some 400,000 people are believed to be inside the territory, trapped under a relentless air and ground campaign.

Doctors and residents reported intense shelling and cases of suffocation and breathing difficulties, accusing the government of using chlorine gas Wednesday night. Hamza Hassan, a surgeon working at one of the hospitals in eastern Ghouta, said that staff was overwhelmed with chlorine odor and that he treated 29 children with breathing problems.

Such reports, which have been recurrent in the past weeks, could not be independently confirmed. The government has repeatedly denied using chlorine gas.

Ingy Sedky, the ICRC spokeswoman in Syria, said Thursday’s aid was postponed, and had no confirmation when it would take place.

“The situation is evolving rapidly on the ground, which doesn’t allow us to carry out the operation in such conditions,” she said.

Earlier this week, the first convoy in weeks made it into the town of Douma in eastern Ghouta, but 14 of the 46 trucks were not able to fully offload critical humanitarian supplies because of stepped-up violence.

Civilians are not safe anywhere in eastern Ghouta, and aid workers who entered briefly Monday said some residents had not seen sunlight for two weeks because they were sheltering underground.

At least 800 civilians have been killed since the offensive started Feb. 18, according to the Syrian Observatory of Human Rights group, which monitors the conflict through a network of activists on the ground.

Russia’s military has said it is playing a key role supporting the assault on eastern Ghouta to combat “terrorists” hiding there and threatening Damascus.