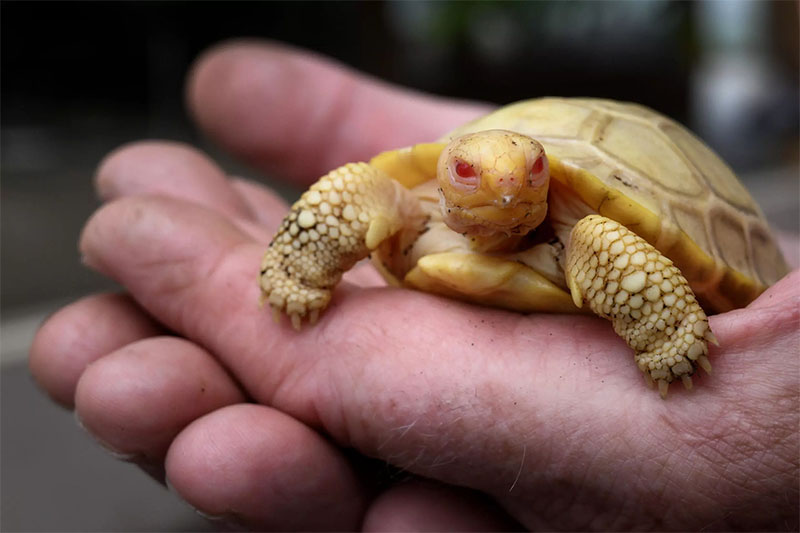 The baby tortoise may be a unique sight to behold with fair skin and red eyes. It weighs around 50 grams (1.7 ounces), and fits in the palm of one’s hand.

Albinism is a genetic condition that results in little or no production of the pigment melanin, which determines the colour of the skin, hair and eyes. In animals, it can be accompanied by loss of sight and hearing.

The condition has never been observed in the tortoise species whose skin and shell are usually black, both in captivity and the wild.

“We are blessed by the gods,” said Philippe Morel, owner of Tropiquarium zoo in Servion village, western Switzerland.

He said the creature was of “incredible zoological interest” as a small group of schoolchildren marvelled at the baby in front of a glass window.

The International Union for Conservation of Nature (IUCN) lists the Galapagos giant tortoises, which can live up to 200 years, as endangered.

Around 23,000 tortoises are believed to live on the archipelago.

The park’s owner said he believed the albino tortoise’s lifespan would be limited to a few weeks in the wild but is hopeful the creature, whose sex is still unknown, will live a long life.

“It’s crazy how much it climbs,” Morel said.

“It’s more active than the other,” said his son, Thomas Morel, who is in charge of the animals at the zoo, while showing another tortoise — the usual black — born in early May.

The birth is also exceptional because the tortoises have difficulty reproducing due to their size — they can reach up to 200 kilogrammes (440 pounds). The rate of successful births is only around two percent.

So far there have been new tortoise arrivals in only three zoos worldwide, including two in Switzerland.

Woman returns 36,000 found stuffed inside free couch she got online