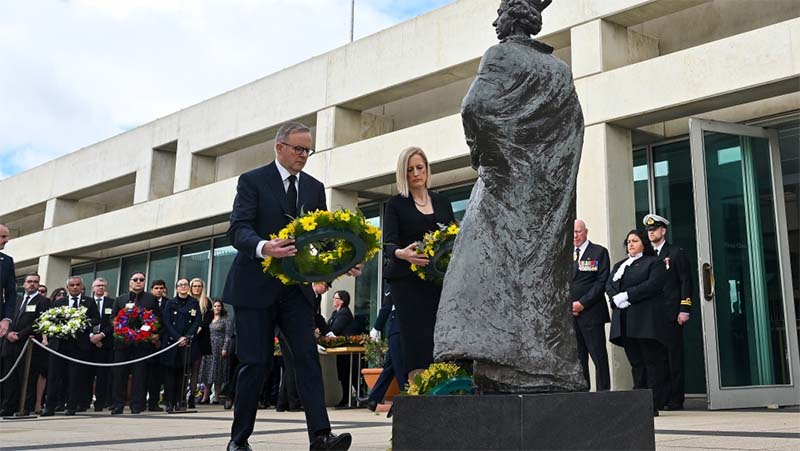 CANBERRA, AUSTRALIA – Many regarded Australians’ respect and affection for the late Queen Elizabeth II as the biggest obstacle to the country becoming a republic with its own head of state.

Now after her death and with a pro-republic Labor Party government in power, Australia’s constitutional ties to the British monarchy will again be open to first-order debate for the first time since change was rejected at a 1999 referendum.

During her long reign, the queen connected to Australia in ways that no monarch before her had done.

In 1954 she became the only reigning British monarch to visit Australia. Such was her star power, an estimated 70 per cent of Australia’s population turned out to see her during a punishing two-month itinerary that took her and her husband Prince Philip to 57 towns and cities spread across vast distances. She visited 16 times, the final time in 2011 when she was 85.

Her face is the only monarch to appear on Australian money since decimal currency was introduced in 1966 when Australian dollars and cents replaced British-style pounds, shillings and pence.

Her eldest son, King Charles III, was officially proclaimed Australia’s head of state Sunday by the monarch’s Australian representative Governor-General David Hurley at a protocol-heavy ceremony at Parliament House that ended with a 21-gun salute.

Anthony Albanese, who describes himself as the first candidate with a “non-Anglo Celtic name” to run for prime minister in the 121 years that the office has existed, started laying the groundwork for an Australian republic when Labor was elected in May after nine years in opposition.

Albanese created a new position of Assistant Minister for the Republic and appointed Matt Thistlethwaite to the role in June. Thistlethwaite had said there would be no change in the queen’s lifetime.

The prime minister has said that a republic referendum is not a priority of his first three-year term in government.

He is already planning a referendum to be held in the current term that would enshrine an Indigenous Voice to Parliament in Australia’s constitution. While details have yet to be finalized, the voice would provide a mechanism that would allow Indigenous representatives to address Parliament about laws that effect their lives.

Since news of the queen’s death broke Friday in Australia, Albanese has brushed off questions about an Australian republic.

“Now is not a time to talk about our system of government,” Albanese told Australian Broadcasting Corp. on Sunday.

“Now is the time for us to pay tribute to the life of Queen Elizabeth, a life well lived, a life of dedication and loyalty including to the Australian people and for us to honour and grieve,” Albanese added.

Opposition leader Peter Dutton, a monarchist, has similarly avoided questions about why Australia needs a king.

The Australian Republic Movement, an organization that campaigns for Australia to become a republic and is unaffiliated with any political party, was widely criticized over a political statement issued soon after news of the queen’s death.

The statement referred to the queen’s comments surrounding the 1999 referendum that voted to maintain the British monarch as Australia’s head of state.

“The queen backed the right of Australians to become a fully independent nation during the referendum ΓÇª saying that she has `always made it clear that the future of the monarchy in Australia is an issue for the Australian people and them alone to decide, by democratic and constitutional means,”‘ the statement said.

That referendum largely failed because Australians were divided about what kind of president they wanted. The monarch is represented in Australia by a governor-general who in recent decades has always been an Australian citizen. The governor-general is appointed by the monarch on the prime minister’s advice.

The referendum recommended that the monarch and the monarch’s representative be replaced by a president chosen by at least two-thirds of lawmakers in Parliament.

But many republicans wanted voters to elect the president as they do in the United States, so joined with monarchists in opposing the republic model then on offer.

The minor Greens party, which is influential in the Senate where no party holds a majority of seats, was also criticized for raising the republic within hours of the queen’s death.

“Now Australia must move forward. We need Treaty with First Nations people, and we need to become a Republic,” Greens leader Adam Bandt tweeted on Friday. Australia is rare among former British Empire countries in having no treaty with its Indigenous peoples.

There were suspicions that the British royal family had instructed Kerr to bring down a democratically-elected Australian government.

Historian and Whitlam biographer Jenny Hocking fought a four-year legal battle to have correspondence between Kerr and Buckingham Palace released by the National Archive of Australia in 2020. Lower courts accepted that letters between the monarch and governor-general, two central figures in Australia’s constitution, were personal and might never be made public.

But the High Court found in Hocking’s favor in a 6-1 majority ruling that allowed the letters to be released.

While the queen was the monarch at the time, King Charles, then Prince Charles, had also influenced Kerr’s decision to fire Whitlam, Hocking said.

Charles had been discussing with Kerr the possibility of sacking Whitlam three months before Kerr became the only governor-general to bring down an Australian government.

“It’s clearly an influence on Kerr’s decision to dismiss the government — no doubt about that,” Hocking said.

“It’s an appalling involvement. It doesn’t do anyone service to pretend that’s not the case. We need to acknowledge that,” she added.

Albanese has said the 1975 crisis reinforced the need for an Australian head of state instead of a British monarch.

John Howard, a monarchist who was prime minister when Australians voted against severing their constitutional ties to their former colonial master, said those ties can survive the queen’s death.

“The strength of the monarchy in Australia was immeasurably increased by the personal popularity of the queen,” Howard said.

“That’s not to say it won’t continue. It will continue in a different form,” Howard added.