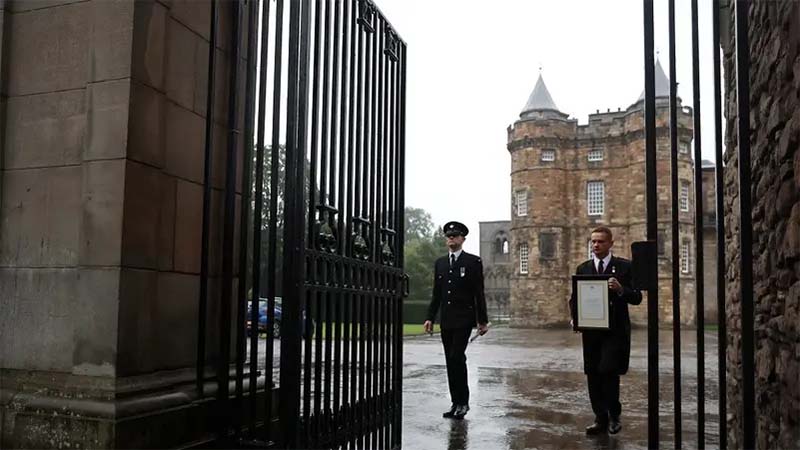 The coffin of Queen Elizabeth will be taken from her home in the Scottish Highlands on a slow, six-hour journey to Edinburgh on Sunday, giving the public a chance to line the roads in tribute to the monarch who died after seven decades on the throne.

The death of the 96-year-old has provoked tears, sadness and warm tributes, not just from the queen’s own close family and many in Britain, but also from around the globe – reflecting her presence on the world stage for the last 70 years.

On Sunday at 0900 GMT, Elizabeth’s oak coffin, which has been in the ballroom of Balmoral Castle covered with the royal standard of Scotland and with a wreath of flowers on top, will be placed in a hearse by six gamekeepers.

Accompanied by the queen’s daughter, Princess Anne, the cortege will slowly make its way from the remote castle, winding through small towns and villages to Edinburgh where the coffin will be taken to the throne room of the Palace of Holyroodhouse.

Tens of thousands have gathered at royal palaces in the days since queen’s death on Thursday to leave flowers and to pay their respects.

“I know how deeply you, the entire nation – and I think I may say the whole world – sympathize with me in the irreparable loss we have all suffered,” her son King Charles said at a ceremony on Saturday where he was officially proclaimed the new monarch.

“It is the greatest consolation to me to know of the sympathy expressed by so many to my sister and brothers and that such overwhelming affection and support should be extended to our whole family in our loss.”

While queen’s death was not totally unexpected given her age, the fact her health had been deteriorating and the passing of her husband of 73 years Prince Philip last year, there was still a sense of shock at the news.

“We all thought she was invincible,” her grandson Prince William now the heir to the throne, told a well-wisher on Saturday as he met crowds at Windsor castle.

The queen’s state funeral will be held at London’s Westminster Abbey on Monday, September 19, which will be a public holiday in Britain, officials announced. US President Joe Biden said he would be there, although full details of the event and the attendees have not yet been released.

Before that, her coffin will be flown to London and there will be a somber procession when it is later moved from Buckingham Palace to Westminster Hall where it will lie in state for four days.

In 2002 more than 200,000 people queued to pay their respects to the queen’s mother while her coffin lay in state and aides have previously said there is an expectation that millions may want to visit.

“It goes without saying that we can expect large numbers of people,” the spokesperson for Prime Minister Liz Truss told reporters.

Truss, whose appointment as prime minister on Tuesday was the queen’s last public act, will join King Charles as both the new head of state and prime minister tour the four nations of the United Kingdom in the next few days.

Charles, 73, immediately succeeded his mother but was officially proclaimed as king on Saturday in a colorful ceremony laden with pageantry and dating back centuries following a meeting of the Accession Council at St James’s – a royal palace built for Henry VIII in the 1530s.

Charles is now the 41st monarch in a line that traces its origins to the Norman King William the Conqueror who captured the English throne in 1066.

Elizabeth’s death has capped a difficult couple of years for the royal family which has seen the loss of Prince Philip, its patriarch, her second son Prince Andrew accused of sex abuse – which he denied – and grandson Prince Harry and his wife Meghan step down from royal life to move to California.

Harry and Meghan have been alienated from the rest of the family since, with Harry and brother William said to be barely on speaking terms. But the death of their grandmother managed to reunite them, as they appeared together with their wives outside Windsor Castle to meet the crowds on Saturday.

A royal source described it as an important show of unity at an incredibly difficult time for the family.