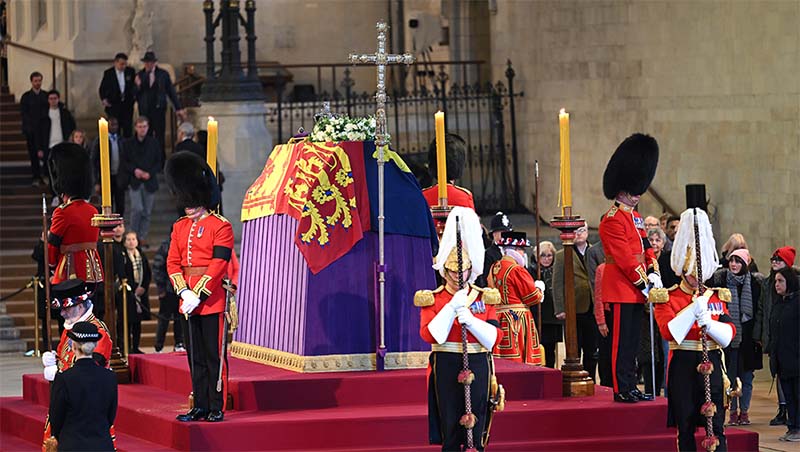 The state funeral for Britain’s Queen Elizabeth II was held in Westminster Abbey, London, on Monday.

Her coffin was carried on the Royal Gun Carriage by 142 members of the Royal Navy to the abbey where the service begun at 11 a.m. local time.

Prayers were read by Prime Minister Liz Truss, Archbishop of Canterbury Justin Welby, and Reverend David Hoyle, Dean of Westminster, among others, and there was choir singing followed by a two minute silence and the National Anthem.

Heads of state from around the world including Jordan’s King Abdullah attended the service. Saudi Arabia was represented by Prince Turki bin Mohammed.

“Her late majesty famously declared on her 21st birthday broadcast that her whole life would be dedicated to serving the nation and the Commonwealth,” said Welby.

“Rarely has such a promise been so well-kept. Few leaders receive the outpouring of love that we have seen… She was joyful. Present to so many, touching a multitude of lives.”

Reverend David Hoyle, Dean of Westminster, added: “With gratitude we remember her unswerving commitment to a high calling over so many years as Queen and head of the Commonwealth.”

“With admiration we recall her lifelong sense of dedication and duty to her people. With thanksgiving we thank god for her constant example of Christian faith and devotion.”

After the service, the coffin was taken on a procession towards Wellington Arch at Hyde Park where it was due to be loaded into a hearse and taken to Windsor Castle.

A more intimate service is due take place at the castle on Monday afternoon where she will be laid to rest.

The coffin had previously been lying-in-state at the nearby Westminster Hall where hundreds of thousands of mourners had paid their respects, some having queued in the streets of London for more than 20 hours.

Queen Elizabeth II mourned at funeral by Britain and world