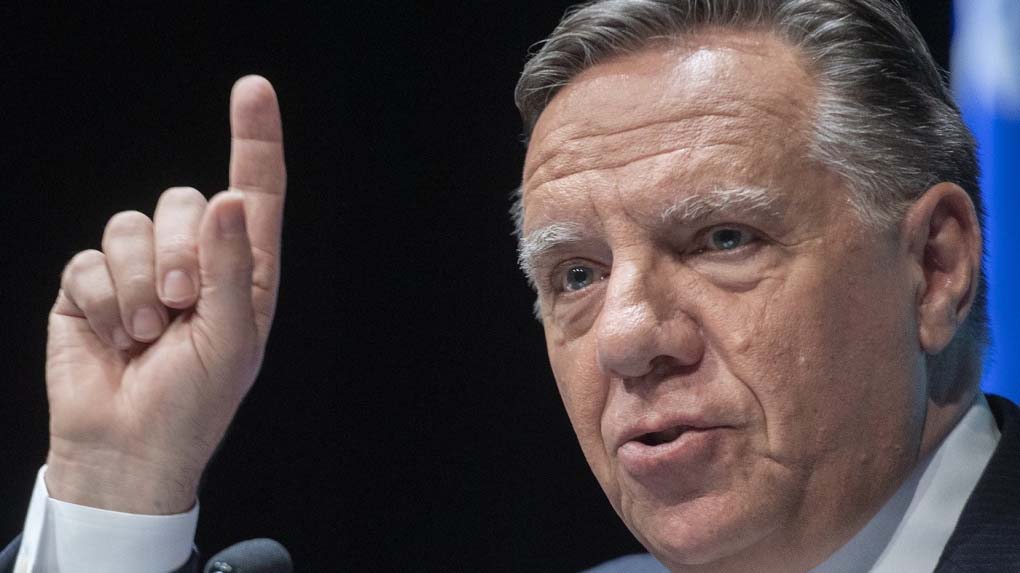 The head of a major employers’ group in Quebec says an election campaign is not the time to have a serious discussion about immigration.

“We are very much aware that these are sensitive issues, particularly around language,” Blackburn said.

Three weeks in, party leaders have not shied away from putting immigration front and centre in the Quebec campaign.

The debate has so far been superficial, focused on numbers — parties have been accused of “one-upping” each other with immigration targets — and the ambiguous concept of the province’s “capacity to integrate” newcomers.

Though, days later, he told a campaign crowd that non-French-speaking immigration threatens “national cohesion” in the province.

During Thursday night’s leadership debate, Legault warned that if Quebec doesn’t gain more powers, it could end up like Sweden, which is struggling with a crime wave linked to immigration.

Blackburn, meanwhile, says Quebec has the capacity — and desperately needs — to accept up to 100,000 immigrants a year to address labour shortages negatively affecting the quality, price and availability of goods and services across Quebec.

That number is a non-starter for Legault, whose party has a commanding lead in the polls and wants to keep the level of immigrants at 50,000 per year — the maximum, he says, that Quebec can integrate properly and teach French.

Political scientists and economists, however, say there isn’t any research that offers definitive answers to how many immigrants a society, including Quebec, can welcome.

Increasing immigration levels to more than 80,000 a year, he says, risks creating “xenophobia and racism” toward immigrants and pushing voters into the arms of people who would drastically cut the number of newcomers to the province.

Mireille Paquet, a political science professor at Concordia University, strongly challenged that theory, adding that the research is inconclusive.

“What we know for sure,” she said, “is that what causes the backlash (against immigrants) is not, per se, the number of immigrants but feelings of insecurity in the non-immigrant population and that feeling can be brought up by public policies such as cutting social services… It’s something politicians can address.”

Paquet says the idea that there is a limited “capacity to integrate” is often touted by restrictionists and people on the right as a reason to curtail immigration.

The debate, she notes, should not be around the rate of arrival or the number of annual immigrants but on what the government is going to do to ease feelings of insecurity in the local population.

“It also depends on what is our expectation of integration,” she said. “What is good integration? That has changed over time, and that will continue to change.”

The debate over immigration during the election campaign has also focused on whether more newcomers would help solve the province’s labour shortages.

Parti Québécois (PQ) Leader Paul St-Pierre Plamondon says it won’t, and he is promising to cut immigration to 35,000 a year and only accept people who already speak French.

The Liberals (PLQ) number is 70,000 newcomers a year, and Québec Solidaire (QS) says it wants to accept up to 80,000 immigrants a year to have enough people to help build its ambitious climate change projects.

Yet, Fortin is adamant that immigrants do not address labour shortages but could exacerbate them.

Even if a company solves its labour problems by hiring foreigners, he says, those newcomers will be looking to spend money, consume services and products, seek health care and enrol their children in school.

“You solve a shortage in one area, and it reappears in another,” Fortin said

His solution, however, is not politically palatable — especially during an election campaign.

The only way to solve labour shortages, he said, is to increase unemployment.

Blackburn, for his part, is calling on whichever party wins on Oct. 3 to convene a forum with stakeholders to discuss in a calm, factual and rational way the best way to address the labour shortages that he says are causing billions in dollars of losses to companies across the province.

“We should not see immigrants as consumers of public services,” Blackburn said. “They are here to contribute to the economic vitality of Quebec.”