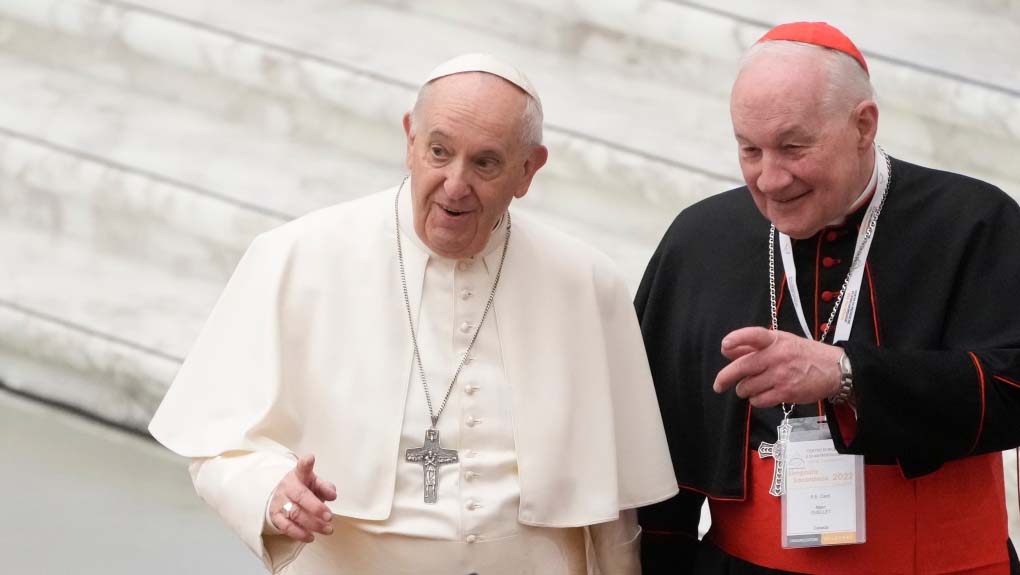 Quebec Cardinal Marc Ouellet, once considered a front-runner to become pope, has been accused of sexual assault and is among a list of clergy members and diocesan staff named in a class-action lawsuit against the archdiocese of Quebec.

A woman identified as “F.” in court documents tabled on Tuesday accused Ouellet of several incidents of unwanted touching, including sliding his hand down her back and touching her buttocks at a 2010 event in Quebec City.

“That day, more than during previous meetings, F. understood that she must flee Cardinal Marc Ouellet ΓÇª the uneasiness she felt was more present than ever,” the lawsuit said.

In the introductory application for class action filed on Tuesday, F. claimed to have been sexually assaulted by Ouellet between 2008 and 2010 and by Father Leopold Manirabarusha between 2016 and 2018.

The lawsuit involving Ouellet is one of two introductory applications for class action brought by Montreal-based law firm Arsenault Dufresne Wee Avocats. The two class actions had recently been authorized by a Quebec judge, and the law firm had 90 days to submit the introductory documents detailing the alleged crimes.

Lawyer Justin Wee said Tuesday in an interview it’s “inevitable” that the class actions his law firm filed will lead to more people coming forward against the church in the coming weeks.

In the first lawsuit, in which Ouellet is named, 101 alleged victims have accused about 88 priests or diocesan staff of sexual assault. The archdiocese of Quebec said in a statement on Tuesday it was aware of the allegations, but it declined to comment.

In the second lawsuit, against the Brothers of the Christian Schools of francophone Canada, 193 alleged victims have accused 116 members of that organization of sexual assault. The Brothers did not immediately respond to a request for comment on Tuesday.

According to the lawsuit involving Ouellet, F. met the cardinal in 2008 when she was 23 and working as a pastoral intern at the Quebec archdiocese. At the time, the cardinal was the archbishop of Quebec, “the most important person of the archdiocese,” Wee said.

“If the most important person ΓÇª is capable of doing such a thing, we can imagine what the others can do,” he said. “When the person best positioned to put in place policies so that assaults don’t occur has (alleged) sexual misconducts, that means a lot.”

Following a dinner at the Sisters of Charity in Beauport, Que., in August 2008, the cardinal allegedly massaged F.’s shoulders and stroked her back in a conference room, according to the lawsuit.

“F. remained frozen in the face of this intrusion and didn’t know how to react,” the lawsuit said.

In November of that year, the cardinal allegedly kissed her cheek and hugged her “with familiarity, even though they had only seen each other once or twice before, and held her firmly against him, caressing her back with his hands.”

In 2010, during an ordination ceremony for a colleague, Ouellet allegedly told F. that it was the second time they had seen each other in one week and that he could kiss and hug her again because “there is no harm in spoiling yourself a little.”

The cardinal then allegedly kissed her cheek, hugged her and “slid his hand along F.’s back to her buttocks.”

When she tried to speak out about the cardinal’s alleged actions, F. was told that Ouellet was “very friendly” and that she wasn’t the only woman to have that kind of “problem” with him, according to the court documents.

In 2020, after F. participated in sexual assault training, she began to have “flashbacks of what she experienced with Cardinal Marc Ouellet,” and she understood that the clergyman’s actions “constitute non-consensual touching of a sexual nature and therefore, sexual assault,” the lawsuit said.

Ouellet in 2013 was considered a front-runner for the papacy, following the resignation of Pope Benedict XVI. At the time, Italian media reported that Ouellet tied with the Italian Cardinal Angelo Scola in early voting at the Sistine Chapel, with Jorge Bergoglio — who eventually became Pope Francis — coming in third. Ouellet reportedly convinced his fellow cardinals to throw their support behind Bergoglio.

F. wrote a letter to Pope Francis in January 2021 regarding Ouellet, and a month later, she was informed that the Pope appointed Father Jacques Servais to investigate her allegations. The court documents said that as of summer 2022, “no conclusion concerning the complaints against Cardinal Marc Ouellet has been transmitted to F.”

Wee said that F. tried to reach the Vatican more than a year and a half ago, and as she hasn’t received any answers, “she can consider that it isn’t being taken seriously.”