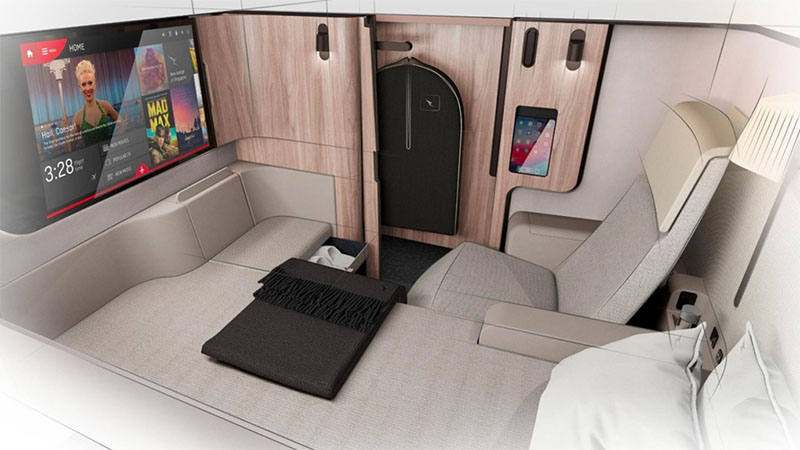 Qantas has taken an important step toward launching Project Sunrise, its long-dreamed-of goal to establish direct flights between Australia and the cities of New York and London.

The airline has ordered 12 Airbus A350-1000s planes, with hopes that the ultra-long-haul routes can begin operating in 2025.

In total, there will be 238 total seats on each plane, which is the lowest number for any Airbus A350s currently in service. Those seats are spread between four classes of service — first class, business class, premium economy and economy.

Comfort will be a must, as these flights will clock in over the 19-hour mark, making them the world’s longest non-stop flights.

Renderings for the plane interiors give some clues about what Qantas is planning for passengers on board.

Meanwhile, the least expensive economy class seats will have a pitch of 33 inches, which compares with an average 30-31 inches on most carriers.

“Wellbeing Zones” will use communal areas of the plane to store healthy snacks and drinks as well as provide travellers a place to get up and stretch.

A DREAM YEARS IN THE MAKING

Australia’s national flag carrier has made no secret of its goal to run direct flights between Melbourne and Sydney in Australia and New York City and London.

Qantas has dubbed the scheme “Project Sunrise.” The name was inspired by clandestine World War II flights that were made from Perth to Sri Lanka en route to London. They were fraught with danger, and lasted so long they saw two sunrises.

“For more than 100 years, Qantas has been at the forefront of transforming the way the world travels, particularly through direct flights,” Qantas Group CEO Alan Joyce said in a statement.

“Now, the A350 and Project Sunrise will make almost any city in the world just one flight away from Australia. It’s the last frontier and the final fix for the tyranny of distance that has traditionally challenged travel to Australia.”

In 2019, the airline ran a series of test flights on the Sydney to New York City and Sydney to London routes as an experiment.

The crew and passengers on board had their health monitored during the journey to see how such a long flight could affect future fliers. Tracking devices monitored sleep patterns, activity cycles, food and drink consumption and other data.

Like many travel projects around the world, Sunrise was derailed by the coronavirus pandemic.

However, Joyce confirmed that the project was still a priority for Qantas.

Last year, the CEO told CNN’s Richard Quest that “once we finish (upgrading Qantas’ domestic fleet), which we’ll do early in 2022, we’ll revisit Sunrise and the likelihood is somewhere like 2024 or 2025 for the first aircraft arriving, given the delay.”

Although the first Project Sunrise flights are still years away, Qantas has already started thinking about expanding its ultra-long-haul offerings.

The airline confirmed that Paris and Frankfurt are also being considered for future direct flights after the New York City and London routes are established.

In 2019, Qantas also included the city of Brisbane as one of the eastern Australia hubs for these flights, but it’s unclear whether that remains part of the Project Sunrise plan.

Meanwhile, a 17-hour nonstop flight connecting Melbourne and Dallas made its debut in March 2022.