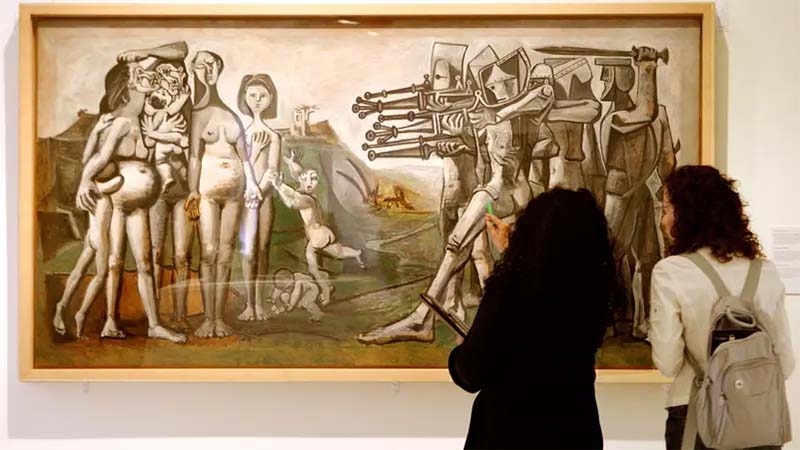 Two climate activists glued their hands to the perspex covering of Picasso’s anti-war painting “Massacre in Korea” in a Melbourne art gallery on Sunday, police, protesters and the gallery said.

The black-clad activists were shown with their hands pressed against the Picasso in a room of the National Gallery of Victoria in images shared on social media by the Extinction Rebellion movement.

A man wearing a T-shirt with the Extinction Rebellion symbol — an hourglass in a circle — stood alongside them.

On the ground at their feet lay a black banner reading “Climate Chaos = War + Famine.”

“It is believed three protesters entered the ground level of the gallery before a man and a woman glued themselves to a protective covering of a Picasso painting,” said a Victoria Police spokeswoman.

The protesters — a 49-year-old woman from New South Wales and a 59-year-old man from Melbourne — were “removed from the painting” more than an hour after their action is believed to have started, police said.

The pair, alongside a 49-year-old Melbourne man, “have been arrested and are assisting police with their enquiries,” they said.

The gallery said it had called the police and closed the exhibition to the public during the protest.

“The protesters’ hands were safely removed from the perspex with no harm to the work,” said a spokesperson for the National Gallery of Victoria.

The 1951 Picasso work “shows the horrors of war,” Extinction Rebellion Victoria said on its Facebook page.

“Climate breakdown will mean an increase in conflict around the world. Now is the time for everyone and all institutions to stand up for action!” the group said.

The painting was being shown on the final day of the gallery’s “The Picasso Century” exhibition.