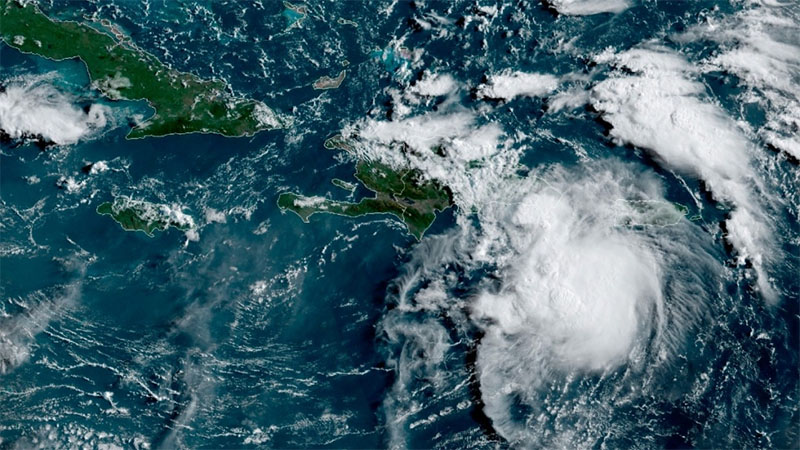 Tropical Storm Fred swept into the Dominican Republic on Wednesday, then weakened to a tropical depression after nightfall while dumping heavy rains that forecasters warned could cause dangerous flooding and mudslides there and in neighboring Haiti.

Some 300,000 customers were without power in the Dominican Republic and more than a half million were affected by swollen rivers that forced part of the aqueduct system to shut down, government officials reported.

After a quiet month of no named storms in the region, Fred became the sixth of the Atlantic hurricane season late Tuesday as it moved past the U.S. Virgin Islands and Puerto Rico on a forecast track that would carry it toward Florida over the weekend.

Government crews with megaphones walked through impoverished neighborhoods in the Dominican capital of Santo Domingo ahead of the storm urging those in low-lying areas to evacuate. Hours later, the government reported flooding in one courthouse.

Tropical storm warnings were discontinued in the U.S. territories after pelting the islands with rain, leaving some 13,000 customers without power in Puerto Rico.

Forecasters said Fred was expected to become a tropical storm again Thursday as it moved near the Turks and Caicos Islands and the southeastern Bahamas and then pass north of the northern coast of central Cuba on Friday. People in Florida were urged to monitor updates.

Puerto Rico Gov. Pedro Pierluisi had closed government agencies on Tuesday at noon and officials noted that some gas stations had shut down after running out of fuel.

More than a month had passed since the last Atlantic storm, Hurricane Elsa, but this time of summer usually marks the start of the peak of hurricane season.

The hurricane center issued a watch for Haiti from the northern border with the Dominican Republic to Gonaives and for the Cuban provinces of Ciego de Avila, Camaguey, Las Tunas, Holguin, Granma, Santiago and Guantanamo. Also included in the watch was the Turks and Caicos Islands and southeastern Bahamas.

The storm was expected to produce rainfall of 3 to 5 inches (7 to 12 centimeters) over the Dominican Republic with up to 8 inches (20 centimeters) in some areas.

One month after Cuba protests, hundreds remain behind bars