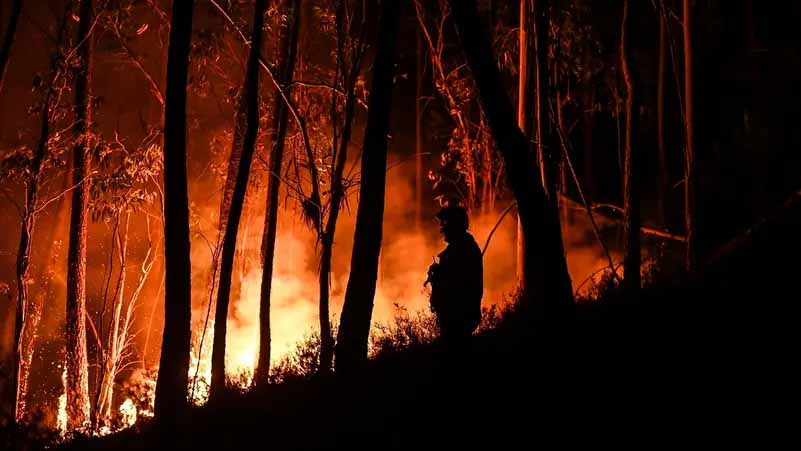 More than 3,000 firefighters and over 60 aircraft battled wildfires Sunday in Portugal that authorities say have injured 29 people.

Spain, which has also endured wildfires recently, quickly responded by mobilizing two firefighting planes to send to its Iberian neighbor, according to the EU crisis commissioner, Janez Lenarcic.

Portugal’s government said it has deployed 60 aircraft to support its ground crews.

The European Union says climate change has the continent facing one of its hardest years for natural disasters such as droughts and wildfires.

Across the border in Spain, a fire in the southwest led authorities to evacuate 30 people from homes as a precaution. Some 115 firefighters backed by helicopters and planes were deployed to that fire near the village of El Ronquillo.

Portuguese Prime Minister António Costa postponed his plans to visit Mozambique this week “in view of the weather forecasts that indicate a very serious worsening of the risk of rural fires.”

Portuguese President Marcelo Rebelo de Sousa likewise canceled his trip to New York where he was scheduled to speak at the UN Economic and Social Council.

In June, 96 percent of the southern European country was classified as being in either in “extreme” or “severe” drought.

The fires have caused authorities to increase a state of alert already in place. Portugal’s government declared a state of heightened alert Saturday that will run through Friday.

“This means (…) we can automatically and preventively activate all emergency and civil protection plans at all territorial levels,” said Interior Administration Minister José Luís Carneiro.

The wildfires are coming as Portugal is enduring a heat wave with temperatures expected up to 43 degrees Celsius (109 degrees Fahrenheit).

The country has adopted restrictions barring public access to forests deemed to be at special risk, banned the use of farm machinery and outlawed fireworks.

Costa, in a message on Twitter, reminded citizens not to light any fires outdoors or use heavy farm machinery that can cause sparks.

“Preventing fires is the best help we can give our firefighters,” the prime minister wrote.