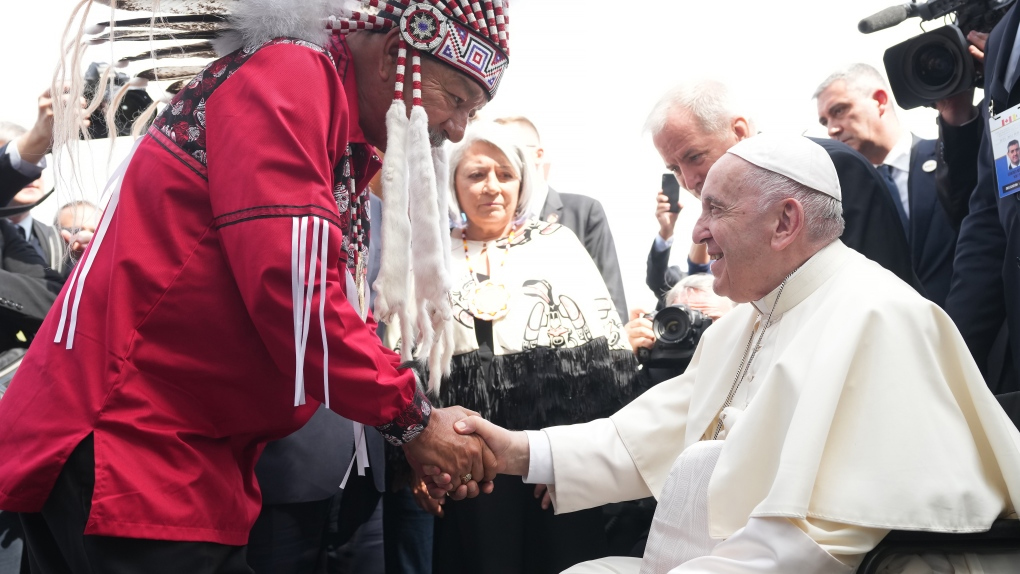 EDMONTON – Pope Francis has arrived in Canada to embark on what he describes as a “penitential” trip aimed at reconciliation with Indigenous people for the Catholic Church’s role in residential schools.

The Pope told reporters on a plane before it landed in Edmonton on Sunday that the six-day visit must be handled with care.

The pontiff is also set to travel to Quebec City and Iqaluit.

“I hope, with God’s grace, that my penitential pilgrimage might contribute to the journey of reconciliation already undertaken. Please accompany me with .prayer,” said a message on the Pope’s Twitter account.

Francis was to be greeted at the Edmonton airport by Prime Minister Justin Trudeau and Gov. Gen. Mary Simon, as well as other church, Indigenous and political dignitaries.

He was next to travel to the St. Joseph Seminary, where he will be staying during the Alberta portion of the trip.

The Pope plans to visit the former Ermineskin Indian Residential School in the community of Maskwacis, south of Edmonton, on Monday. That is where Francis is to deliver his first public statement in Canada and is expected to apologize to Indigenous Peoples for abuses they have suffered.

An estimated 150,000 Indigenous children were forced to attend residential schools in Canada, where neglect and physical and sexual abuse were rampant. More than 60 per cent of the schools were run by the Catholic Church.

Treaty 6 Grand Chief George Arcand Jr. said survivors have been carrying unimaginable trauma for many generations. The Pope’s acknowledgment of their pain is a crucial step, he said.

“This is an important historical moment for survivors of the residential school system and the harm caused by the Catholic Church,” Arcand Jr. said last week.

On April 1, after meetings over several days with First Nations, Inuit and Metis groups at the Vatican, Francis apologized for the deplorable conduct of church members involved in residential schools and promised to visit Canada.

Indigenous delegates had told the Pope they wanted an apology on Canadian soil.

First Nations leaders in Alberta said they expect the Pope’s presence to open old wounds for Indigenous people and mental health counsellors will be at the sites. But they also hope the visit will be a step toward reconciliation.

“We are here with you and we are supporting you,” Louis Bull Tribe Chief Desmond Bull told survivors last week.

The Ermineskin school was one of the largest of the institutions in Canada. Organizers of the papal visit have said they expect about 15,000 people will be at Maskwacis to see the 85-year-old pontiff.

Later Monday, Francis is to meet parishioners of an inner-city church in Edmonton. A large outdoor mass at the city’s football stadium is scheduled for Tuesday. The Pope then heads to nearby Lac Ste. Anne to take part in an annual pilgrimage.

Francis is to travel Wednesday to Quebec City and deliver a public address following meetings with Trudeau and Simon. The following day another large mass is scheduled in Sainte-Anne-de-Beaupre.

The visit is set to finish Friday in Iqaluit before Francis heads back to the Vatican.

Organizers have said that due to the Pope’s age and physical limitations he will take part in public events for about an hour and will use a wheelchair throughout the tour.

Shortly after departing from Rome, the Pope used a cane to help him move around the airplane as he greeted individual reporters.

Thousands have travelled from different parts of the country to take part in the events.

Mabel Brown, a 77-year-old residential school survivor, journeyed to Edmonton from Inuvik to hear the Pope apologize and find forgiveness and healing with other survivors. She hopes it’s an opportunity to move forward in a good way.

“This is a very important time in history,” she said. “Better things are yet to come.”

The Indian Residential Schools Resolution Health Support Program has a hotline to help residential school survivors and their relatives suffering trauma invoked by the recall of past abuse. The number is 1-866-925-4419.

Dear brothers and sisters of #Canada, I come among you to meet the indigenous peoples. I hope, with God's grace, that my penitential pilgrimage might contribute to the journey of reconciliation already undertaken. Please accompany me with #prayer.

2 dead, 2 in custody after daylight shooting in Whistler, B.C.

Where is Pope Francis going, and who is he meeting, during his 6-day visit to Canada?