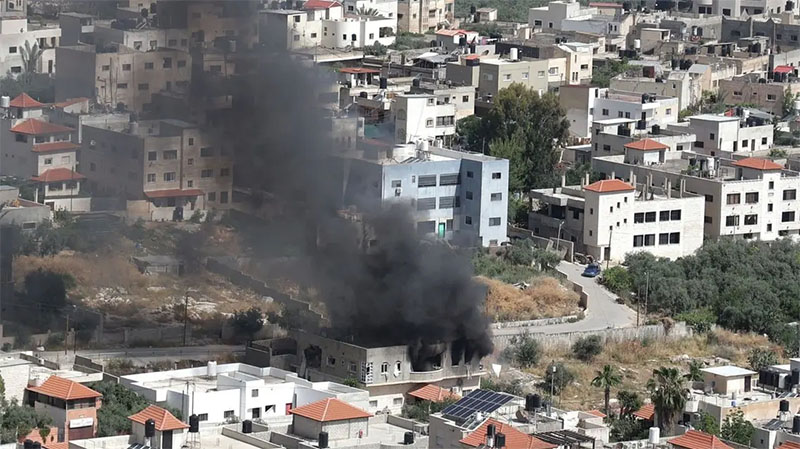 A Palestinian was wounded by Israeli fire during an operation in the northern occupied West Bank city of Jenin on Friday, Palestinian news agency Wafa said.

“Israeli forces Friday morning pounded a house with missiles and injured a Palestinian youth on the outskirts of Jenin refugee camp, according to local sources,” Wafa news reported.

An AFP photographer said Israeli forces were firing grenades at the home of a suspect in the Jenin refugee camp.

“The raid triggered violent confrontations that saw the soldiers opening live fire towards young people attempting to block their passage, hitting one with a bullet in the abdomen,” Wafa said.

The agency identified him as Daoud al-Zubaidi and said he was taken to hospital.

Israel and the Palestinians have traded blame over the fatal shooting of Abu Akleh, who will be buried later in the day in Jerusalem.

The United States, European Union and United Nations have backed calls for a full investigation into what Al Jazeera labelled a deliberate killing “in cold blood.”

Israeli Prime Minister Naftali Bennett had said Wednesday it was “likely” Abu Akleh was killed by stray Palestinian gunfire – but Defense Minister Benny Gantz later conceded that it could have been “the Palestinians who shot her” or fire from “our side.”

Tensions are high with a wave of attacks that have killed at least 18 people in Israel since March 22, including an Arab-Israeli police officer and two Ukrainians.

A total of 31 Palestinians and three Israeli Arabs have died during the same period, according to an AFP tally, among them perpetrators of attacks and those killed by Israeli security forces in West Bank operations.