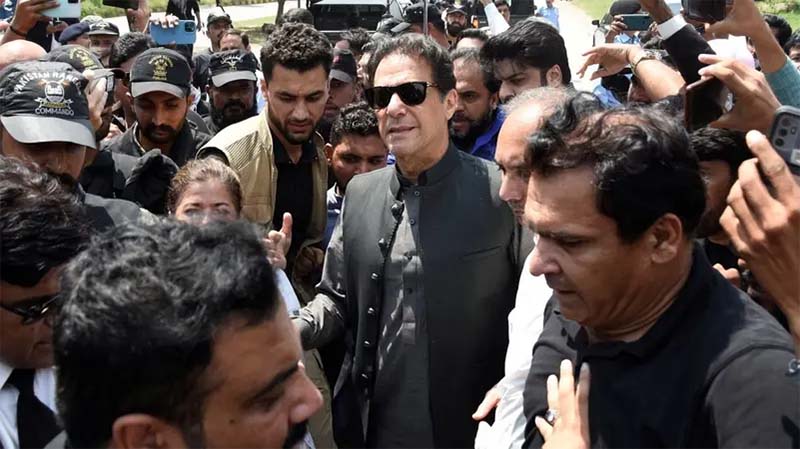 A Pakistan high court on Monday quashed terrorism charges against former Prime Minister Imran Khan, his defense lawyers said, a relief for the former cricket star who has faced a spate of legal woes since being ousted from office.

The charges are related to a speech by Khan in which he allegedly threatened police and judicial officers after one of his close aides was denied bail in a sedition case.

“The case against Imran Khan, however, will remain intact, that will now be tried in an ordinary court, instead an anti-terrorism court,” Chaudhry said.

“This is actually an order to quash the charges,” another of his lawyers, Babar Awan, told Reuters, adding, “It only proves that these are trumped up charges, and just a tool for political victimization.”

Islamabad police brought the charges against Khan in August after his public remarks that he would not spare the police and a judicial officer who had denied bail to his aide.

Khan subsequently explained that his remarks were not meant to be a threat.

The former premier has faced several cases since his ousting in April in a vote of confidence won by opposition parties in an effort led by his successor, Prime Minister Shehbaz Sharif.

One of the cases is at a crucial stage in the high court, which is slated to indict Khan on Sept 22 in a contempt of court case for threatening the judicial officer. If convicted, he could face disqualification from politics for at least five years.

Another case involves foreign funding for his Pakistan Tehreek-e-Insaf party that an election tribunal found unlawful.

Khan, who rode to power in a 2018 election allegedly on the back of support from Pakistan’s military, had fallen out of favor with the powerful generals. Both the military and Khan deny he came to power with the military’s support.

Since his ousting he has held nationwide rallies to demand snap polls, but the ruling coalition has refused it, saying the election will be held as scheduled by the end of 2023.