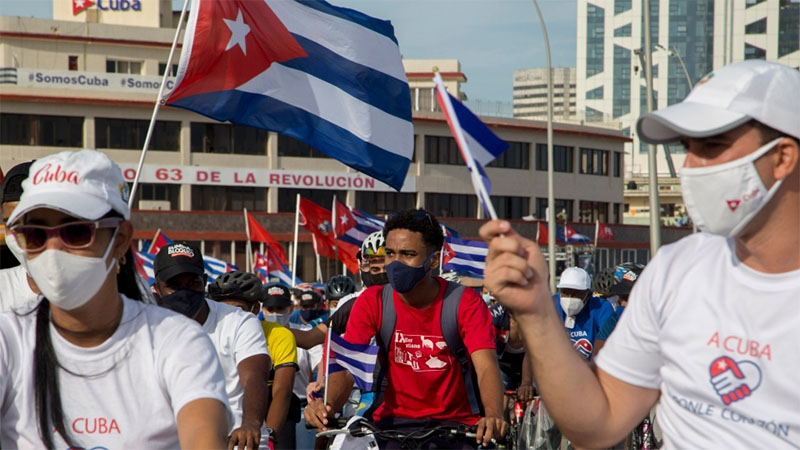 Hundreds of people, including dozens of dissident artists and opposition activists, remain detained in Communist-run Cuba a month after unprecedented anti-government protests, according to rights groups.

Thousands took to the streets nationwide on July 11 to protest a dire economic crisis and curbs on civil rights. The government said the unrest was fomented by counter-revolutionaries exploiting hardship caused largely by U.S. sanctions.

Rights group Cubalex has recorded around 800 detentions, a number that has risen daily as relatives come forward. Many are still too afraid to report the arrest of family members, said Cubalex director Laritza Diversent.

While 249 people have been released, many to house arrest, most remain in “preventative jail,” she said. The whereabouts of 10 people is unknown.

Dozens have already been sentenced to up to a year in prison or correctional work in summary trials, with simplified procedures and often without the chance of hiring a defense lawyer on time, said Diversent.

“The government’s aim is to make an example of those who protested, to stop others from doing the same,” she said.

The government did not respond to requests for comment for this story.

Cuban authorities have not given a figure for the total number of detained in the recent unrest but say they have so far carried out trials for 62 people, 22 of which had hired a lawyer. All but one have been deemed guilty of crimes including public disorder, resisting arrest, and vandalism, they said.

The protests were largely peaceful, although state media showed some demonstrators looting and throwing stones at police. One person died and several people, including government supporters, were injured, authorities have confirmed.

Several of those sentenced were not protesting, but were caught up in the unrest, according to their relatives.

Yaquelin Salas, 35, says her husband intervened peacefully in the arrest of a woman, calling on police agents to not treat her so aggressively. Now he is serving a 10-month prison sentence on charges of public disorder after a collective trial in which just two of the 12 detained had lawyers.

“What they are doing is totally unfair,” said Salas.

Since Cuba’s 1959 revolution, authorities have tightly controlled public spaces, saying unity is key to resisting coup attempts by the United States, which has long openly sought to force political change through sanctions and democracy initiatives. The White House has said it will do what it can to support Cuban protesters.

Gabriela Zequeira, 17, one of several minors detained in the protests, said she was sentenced to house arrest for eight months after being arrested while walking home from the hairdressers on July 11.

Upon her admission to jail, where she was kept 10 days incommunicado, she said she was required to put a finger in her vagina to show she was concealing nothing as part of a strip search. Officers kept interrupting her attempts to sleep and one officer made sexual taunts, she said in an interview.

The Cuban government initially said no minors had been detained, a statement later contradicted by state prosecutors.

Some relatives of those detained said authorities were pressuring them to stop speaking out.

“My family has been silenced,” said emigre Milagros Beirut from her home in Spain. She said four of her relatives in Havana and the eastern city of Guantanamo remained behind bars for protesting peacefully. “They’ve been told those detained will receive a stricter sentence if they say anything.”

Dozens of political activists and dissident artists were among the detained, including some who did not participate in the protests but appeared to have been arrested pre-emptively, said Diversent from Cubalex.

Jose Daniel Ferrer, the leader of Cuba’s largest opposition group, and Luis Manuel Otero Alcantara, head of a dissident artists collective, were both arrested on their way to the protests before even arriving, according to their supporters.

Ferrer’s sister Ana Belkis Ferrer said the family had not been able to speak to or see him, a complaint of many relatives of those detained.

“We don’t know if he’s being beaten, if he’s well or not, whether or not he’s doing a hunger strike,” she said.

Another detained activist, Félix Navarro, 68, president of the Party for Democracy, was in hospital with COVID-19, said Diversent. Several of those detained have denounced unsanitary conditions in jail amid one of the worst COVID-19 outbreaks in the world.