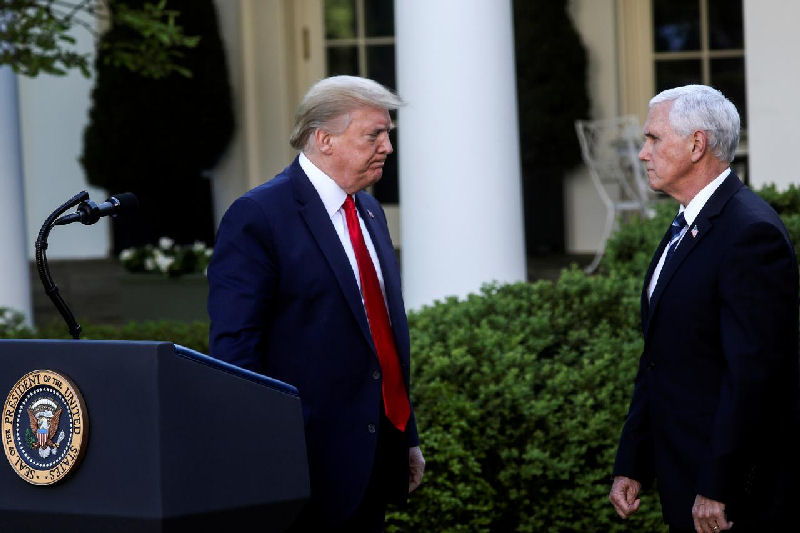 The Trump administration has no plans to keep President Donald Trump and Vice President Mike Pence apart, a person familiar with the matter said on Sunday, as concerns rise about the spread of the coronavirus within the White House.

The New York Times first reported the lack of plans to keep Trump and Pence separated despite concern they both could be incapacitated by the disease, citing two senior administration officials.

The White House did not respond to a request for comment.

Two coronavirus cases in the White House last week spurred fears of contagion for the president and vice president, who are leading the U.S. response to the pandemic, and who have both resumed travel and business schedules even as the U.S. death toll from the virus nears 80,000.

Pence’s press secretary, Katie Miller, the wife of Trump’s senior adviser, Stephen Miller, tested positive for the coronavirus a day after confirmation that Trump’s personal valet had been diagnosed with the disease.

White House Press Secretary Kayleigh McEnany sought on Friday to defend administration efforts to protect Trump and Pence, pointing to new measures taken by the White House including contact tracing and putting in place all guidelines recommended for essential workers.

The White House has also instituted daily coronavirus tests for Trump and Pence.

Anthony Fauci, a high-profile member of the White House coronavirus response team, Robert Redfield, director of the U.S. Centers for Disease Control and Prevention, and U.S. Food and Drug Administration Commissioner Stephen Hahn, were in self-quarantine on Saturday after coming into contact with someone who had tested positive for the disease.

If Republicans Trump and Pence were both to become incapacitated, Democratic House of Representatives Speaker Nancy Pelosi would assume presidential duties under U.S. law.