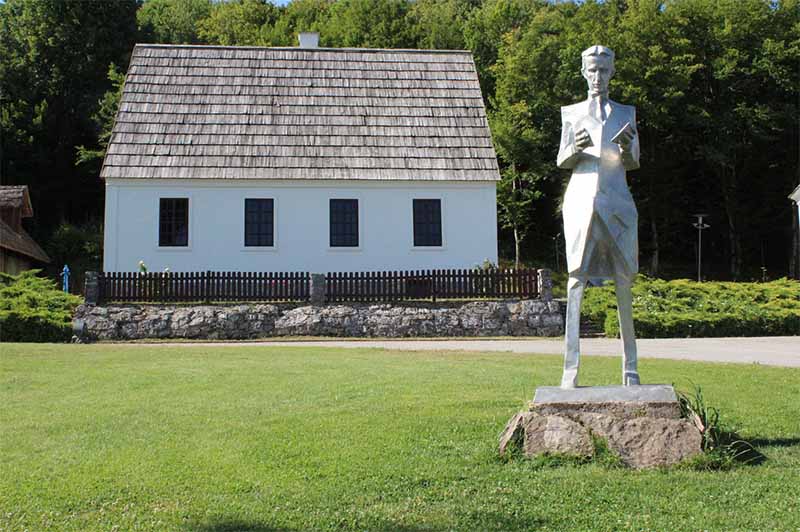 Nikola Milutinov Tesla was born in the small rural village of Smiljan in what is modern-day Croatia. He was born at the stroke of midnight on July 10, 1856, during an electrical storm—a prophetic beginning for the child who was to become known as the Father of Electricity.

Tesla’s father, Milutin Tesla (1819-1879), was an Eastern Orthodox priest as well as a teacher and poet. He served in Smiljan, the village where Nikola was born, before moving the family to Gospic, Lika, where he was parish priest until his death at age 60. In his autobiography, Tesla described his father’s keen mental abilities and training exercises: “These daily lessons were intended to strengthen memory and reason and especially to develop the critical sense, and were undoubtedly very beneficial.”

Tesla’s mother Georgina-Djuka (Mandic) Tesla (1822-1892) descended from one of the oldest families in Lika, known for their inventiveness and intelligence. Although she was illiterate, Djuka could memorize lengthy works of literature. She was also a master bead worker and toolmaker who encouraged her son to invent. Tesla wrote of Djuka: “My mother was an inventor of the first order… She invented and constructed all kinds of tools and devices and wove the finest designs from thread which was spun by her.”

Nikola Tesla had four siblings: older brother Dane, older sisters Milka and Angelina, and younger sister Marica. Dane was born first in 1848 and was considered extremely gifted with a genius level intellect. Tragically, Dane died at age 15 from injuries inflicted by the family’s horse, an accident that young Nikola witnessed. His older sister Milka, born about 1850, married Vukasin Glumicic and they had one daughter, Gina. Milka’s date of death is uncertain.

Tesla’s sister Angelina lived a long and active life. Born about 1853, Angelina married Jovo Trbojevic and had five children. Her grandson William Terbo was an accomplished engineer, author and lecturer who lived in the US and was dedicated to preserving his granduncle’s legacy until his recent death in August 2018.

Marica Tesla (1858-1938) is often remembered as being one of Nikola’s favorite relatives. Marica married Nikola Kosanovic and had five children. Their son Sava Kosanovic was a Yugoslavian diplomat and one of the few family members who was able to spend time with Tesla in his later years.

In the autumn of 1937, Tesla left the Hotel New Yorker to make his regular commute to the Cathedral and library. Whilst crossing the street he was hit by a taxicab and thrown to the ground.

The incident severely damaged his back and broke three of his ribs. But, as he never consulted a doctor, the full extent of his injuries are, to this day, unknown.

Given his age, 81, at the time, he never really recovered and the accident must have affected his psychology and confidence.

Tesla was already a very solitary individual who spent most of his life shying away from society. He was much happier with his own company rather than large crowds and spent most of his time in his workshop or his own imagination.

Following the accident, Nikola Tesla spent more and more time on his own in his room, Room 3327, 33rd Floor, at the Hotel New Yorker. According to the staff at the hotel, he rarely received guests and had special vegetarian-style meals prepared for him daily by the chef.

When he did permit staff into his room he always asked them to remain at least three feet away (91 centimeters) from him. His fate, it seemed, was in his own hands.

The great Nikola Tesla, perfector of AC, inventor of the Tesla coil and all-around visionary inventor and futurist, would die just as he had chosen to live his life – alone.

Nikola Tesla was found dead in his hotel room bed by hotel staff on January the 8th 1943. It was later established that he’d died at approximately 10:45 pm on the 7th.

The maid in question, Alice Monaghan, immediately called a physician who examined Nikola and pronounced him dead shortly after. It was quickly discovered that the cause of death was most likely coronary thrombosis.

This is caused by a blood clot in the blood vessels of the heart restricting blood flow and ultimately leading to heart failure. It is usually associated with atherosclerosis, or build up of cholesterol and fats on blood vessel walls.

Coronary thrombosis is usually the result of a high LDL cholesterol diet, smoking, sedentary lifestyle, and hypertension. Tesla rarely drank tea or coffee, stopped smoking in his 20s, and clearly had low cholesterol and fatty diet towards the end of his life.

He also had an interesting dietary strategy, as revealed in a fascinating 1935 interview during his life. Within it, he also reveals his love for exercise and its importance on a healthy body and mind.

Clearly, the earlier taxi accident had a profound impact on the old man’s last years. A sad and ignoble end to one of the world’s greatest visionaries.