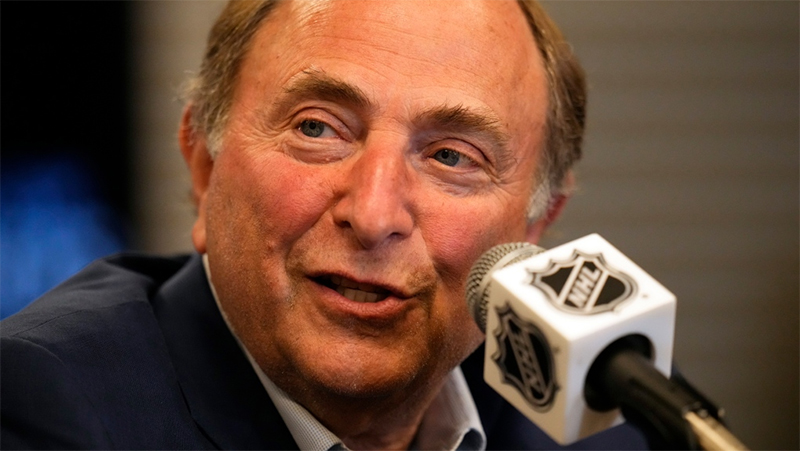 NEW YORK – The NHL for the first time has done an internal demographic study of its staff and all 32 teams, and the results show that hockey has a lot of work to do to increase diversity at all levels.

The report released Tuesday found that 83.6 per cent of the NHL’s workforce is white and that men make up nearly 62 per cent of the total, based on the 4,200 people who participated in a voluntary and anonymous survey (about 67 per cent of all employees).

That nearly mirrors the situation on the ice, where more than 90 per cent of players and nearly all coaches and officials are white.

One of the next steps is turning the data into a race and gender report card produced by the University of Central Florida’s Institute for Diversity and Ethics in Sport, which has for years graded sports leagues on hiring practices.

In the 24-page report, which was presented to the league’s Board of Governors and distributed to multiple internal committees, Commissioner Gary Bettman said the data will shape policies “that will produce the greatest impacts in the years to come.”

The results are not surprising for a sport that for many reasons, from socioeconomic to geographic and more, has remained predominantly white. While the NHL has made efforts to bolster diversity efforts from youth hockey to the front office, change has been slow.

Davis said it is not as simple as recruiting people of colour to work for the NHL, that it starts with improving how underrepresented communities see and feel about the sport itself. The NHL, eager to diversify its fan base, mapped out seven courses of action, from education and community initiatives to marketing and partnerships.

“A number of those steps are already in progress,” Davis said. “You can’t expect to recruit (Black, Indigenous and people of colour) folks to work in the league if you don’t at the same time have your stadium fan code of conduct underway so people feel like the sport is really serious about growing the fan base. You also have to make sure that you are reaching out to the communities from a youth participation perspective, so all of those efforts are underway.”

Some of the NHL’s players have wondered why it took so long. The league hired Davis in 2017 to spearhead diversity and inclusion efforts, which picked up in 2019 when Nigeria-born player Akim Aliu revealed a coach used racist language toward him a decade earlier in the minors. That sparked a broader conversation and led to the formations of several league committees focused on the subject even before the racial reckoning in the summer of 2020, when a handful of current and former minority players founded the Hockey Diversity Alliance.

One of those members, Minnesota’s Matt Dumba, said recently he still sees racism in hockey, adding he’s sick of “the old boys’ club and them dictating who is and who isn’t welcome.” He and Davis spoke last week about the topic.

“We talked about (how) there may be different ways of thinking about this work, but at the end of the day we are all in service of the same outcome and that is to grow the sport and to make sure that folks that look like him and me feel comfortable and welcomed in the sport,” said Davis, who is Black. “We both agreed that that was the goal.”

Akim Aliu, who along with Dumba are members of the Hockey Diversity Alliance, pushed back on the NHL’s report in a lengthy response to The Associated Press.

“A lot of patting themselves on the back. Nothing tangible. A lot of words without much substance. Half of the report is about attracting the BIPOC community and youth engagement. It’s literally what we are doing as current and former players of the league,” wrote Aliu, referring to the HDA launching a pilot program to promote hockey to under-served communities in Toronto this spring.

“We all know there is a major issue in this game, when most of us are saying there are major issues and massive change is needed,” Aliu added. “But (when) a few of you on the inside are saying everything is ok, it confuses the general public on who to support. Until we are all successful and progressing, none of us are. “

Aliu is a journeyman minor leaguer who appeared in seven NHL career games whose revelations in a pair of social media posts led to the Calgary Flames firing Bill Peters. Aliu revealed Peters directed racial slurs at him while he played for the coach in the minors.

Racism still occurs at various levels of hockey. As recently as January, a minor league player was suspended for 30 games for directing a racist gesture at an opposing player who is Black.

Bettman wrote the league is “committed to reckoning with those difficult moments as opportunities to demonstrate our values and create a better future.”

Davis acknowledged such incidents hurt the NHL brand even if they don’t happen in the league itself. She said she also hopes people see progress being made, including teams hiring nine people of colour for C-suite positions since the report was taken and San Jose hiring Mike Grier as the league’s first Black general manager.

“Change can feel uncomfortable,” she said. “There are going to be moments that are very, very uncomfortable, but we have to have a plan of action. We have to keep moving in that direction.”