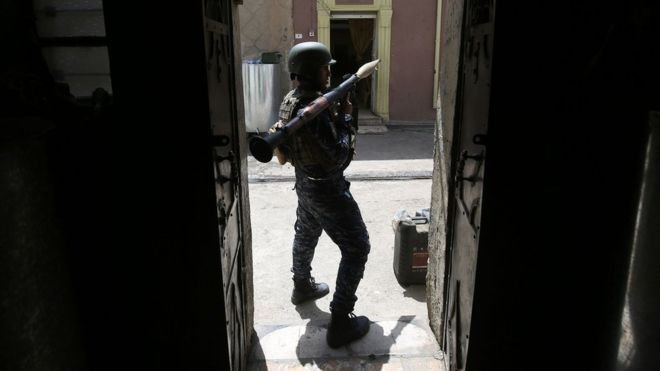 Iraqi security forces say they have opened a new front in the operation against so-called Islamic State (IS) militants in north-western Mosul.

Troops from the army’s 9th Division and the police’s Rapid Response Force are now advancing on the Musharifa, Kanisa and Haramat districts from the north.

They will join troops who are pushing into the Old City from the south.

The troops launched a major offensive to recapture Mosul – the last major IS urban stronghold in Iraq – in October.

Supported by US-led coalition air strikes and military advisers, they managed to take full control of the eastern half of Mosul in January and started an assault on the west in February.

On Sunday, Army Chief of Staff Lt Gen Othman al-Ghanmi told a state-run newspaper that he expected the battle in the west to be completed “in a maximum of three weeks” despite fierce resistance from militants in the Old City.

The densely-populated area includes the symbolically important Great Mosque of al-Nuri, where IS leader Abu Bakr al-Baghdadi proclaimed the establishment of a “caliphate” after Mosul and much of northern Iraq fell to the jihadist group in 2014.

Iraqi officers estimate that the number of militants still inside Mosul at 200 to 300, most of them foreigners. There were believed to have been between 3,000 and 5,000 before the operation started.

Several thousand civilians and military personnel have also been killed, according to international aid organisations.

More than 580,000 civilians have been displaced since the operation to recapture it began, among them 419,000 from western Mosul, the Iraqi authorities say.

Most have taken refuge in nearby camps and reception centres. Others have gone to stay with relatives and friends.